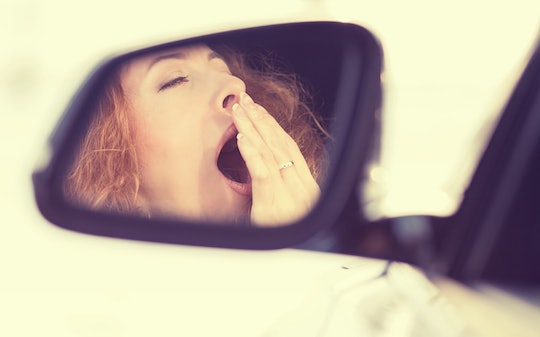 This Is What Happens To Your Brain When It's Sleep Deprived

For some groups of people, going without sleep is a weird competition. It isn't uncommon to hear friends or colleagues bragging about pulling a 16-hour-day on five hours of sleep, as though that proves some measure of superhuman efficiency. But what happens to your brain when you're sleep deprived? Extreme fatigue is a prize no one wants to win.

As it turns out, almost any amount of sleep deprivation can have a negative effect on your ability to function. After one night of sleeping less than six hours, the speed at which your brain processes information slows down, according to the website for Shape. Making simple decisions, such as what to eat for breakfast, can feel insurmountable when you're in this mindset. Additionally, your ability to process emotional information can start to go off the rails as well. According to Live Science, sleep-deprived persons may not be as capable of reading others' facial expressions, and misinterpret a neutral expression for a scowl. (In this light, perhaps RBF is actually in the eyes of the beholder?)

Basically, your ability to process both cognitive and emotional information alike takes a hit when you're sleep-deprived for even a short amount of time. And if you have more longterm sleep problems? It only gets worse.

Unfortunately, things only continue to deteriorate for your brain the longer you go without sleep. According to WebMD, longterm sleep deprivation is associated with mental impairment, as well as mood disorders such as depression. Basically, nothing good comes from being awake for too long.

In fact, such extended periods of chronic insomnia may even cause brain damage. According to a 2014 study in The Journal of Neuroscience, periods of extended wakefulness appeared to damage certain neurons that are responsible for maintaining alertness. Although more research is needed to fully understand how these effects will play out on subjects that aren't mice, it stands to reason that going without sleep only means bad things for your brain.

Of course, most everyone wants to get enough sleep each night. However, everything from crying babies to medication side effects can make getting enough sleep seem like an impossible goal. If you're concerned about your sleep habits, then a trip to your doctor for advice is an excellent starting point. After all, adequate sleep is crucial to your health.

More Like This
Experts Explain Whether It’s Safe For Your Baby To Sleep On Your Chest
Is The Hatch Baby Sound Machine Worth It? This New Mom Says Yes.
Here's How To Handle Potty Training During Nap Time
Endometriosis & Your Sex Life