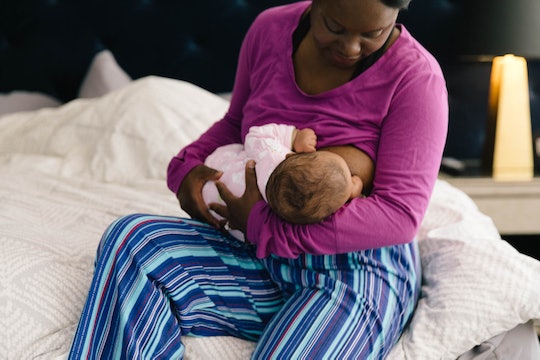 Fascinating Things Happen To Your Brain When You're Breastfeeding & It's Amazing

It's 3 a.m. All you want to do is get an ounce more sleep. Alas, your baby is crying, your breasts are painfully full, and you have an absolute need to feed your baby. It drives you to pull your baby close, and let them nurse until they're milk drunk and you're punch drunk from exhaustion. Yet there's a rush of love you feel for your baby that is incomparable to anything you've ever felt before. There's actually a scientific reason for that. It turns out that there are some fascinating things that happen to your brain when you breastfeed.

For the past 15 years, researchers have been devoting more and more time to the physiologic changes in the mother during the period of breastfeeding, whereas they'd previously given primacy to the study of the infant. A study completed by the International Pediatric Research Foundation found that there were significant changes to the blood volume in the brain before and during breastfeeding, as well as initiating a fluctuating pattern of oxytocin release that corresponds to the milk ejection reflex brought about by the baby's sucking pattern at the breast.

Simply put: your body shoves a ton of bonding hormones at you while filling your brain with blood while you breastfeed.

It's posited that this rush of blood and oxytocin are responsible for the euphoria many women claim to experience while breastfeeding. More reasonably, it's probable that this corresponding boost in blood and chemicals is a contributing factor to healthy maternal bonding between the mother and the baby, as per the study.

It's not just the frontal lobe, either. Prolactin, a hormone of the medial preoptic area of the hypothalamus (the very center of your brain), is greatly affected by the onset of breastfeeding, as per a study in PNAS. "Prolactin-induced behavioral responses in the maternal brain are equally important (as they are in the process of making milk and during reproduction) in ensuring survival of mammalian offspring." It is essentially another bonding mechanism, that, when activated, helps relieve the stress of parenting and breastfeeding, and when it's diminished due to some error of the body, this process gets disrupted — opening up hypothesis related to bonding and depression.

Side note: in men, prolactin is the hormone responsible for maintaining an erection, in case you needed another reason to rail at the injustice of it all.

Another one of the really fascinating things that happens in your brain when you're breastfeeding is that the blood flow increase in your brain happens on the same side of your brain that you're breastfeeding on. It's called an ipsilateral response. That means that if your baby is on your right boob, the right side of your frontal cortex is getting more blood. But, both sides get more oxytocin, according to Pediatric Research.

Also, that oxytocin and prolactin dump? It starts even before your baby gets to your boob. It's as much a response to your emotions as it is to their sucking. Hearing them cry, seeing them root, watching them make the "sucky face," all contribute to the rush of blood and chemicals — hence why your boobs fill immediately when you hear a baby cry. Terribly inconvenient in public.

As per the research, the one-two punch of prolactin and oxytocin ramp up the already rushing hormones of parenting, making you more in tune, protective, and empathetic to your baby, as per the textbook, Infant and Young Child Feeding. It's all around pretty amazing what boobs can do.