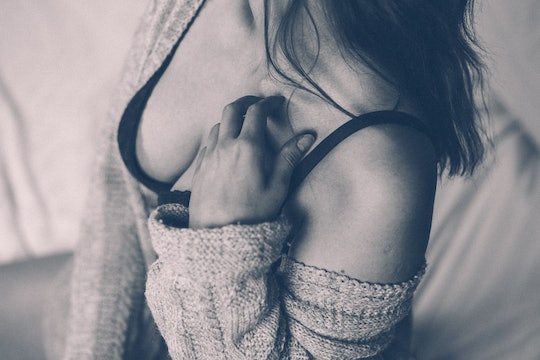 Breasts are pretty serious at multitasking. They produce milk for babies. They sometimes attract romantic partners. They even predict the weather (well, if you're Karen Smith from Mean Girls.) Your breasts can also respond when aroused, though that shouldn't come as a huge surprise. Learning what happens to your breasts as you get turned on will change the way you think about boobs forever.

For starters, breast sensitivity increases with arousal. (Chances are, this is not news). In fact, some women even report experiencing an orgasm through breast and nipple stimulation alone, as noted in the Science of Relationships. Basically, breast play can stimulate the same part of the brain that lights up when the clitoris or vagina are caressed. Hey, it doesn't matter what path you take as long as you get to the same destination, right?

Additionally, breasts can more or less grow with arousal. No, really. It might sound extreme, but breasts can increase by about 25 percent when a woman is aroused, according to HuffPo. If you feel like there is more to handle during the heat of the moment, it's probably not just your imagination.

Additionally, there may be some coloration changes involved as well. This effect will vary based on a person's general arousal response and skin tone, but according to Buzzfeed, plenty of people experience a sex flush as a result of increased blood flow during arousal. For some people, this change in color makes the chest area appear redder than normal. It's a harmless change, though: basically, your body is blushing.

Lastly, your breasts may even release a special kind of sweat. A type of pheromone-laden sweat can be generated from the areola, according to the website for Women's Health. Even though you may not consciously notice a change in scent, it's possible the sweat subconsciously ramps up your partner's sex drive. Whatever the case, it's another amazing feat from the breasts. They can grow, change color, cause an orgasm, and (possibly) make your partner more attracted.