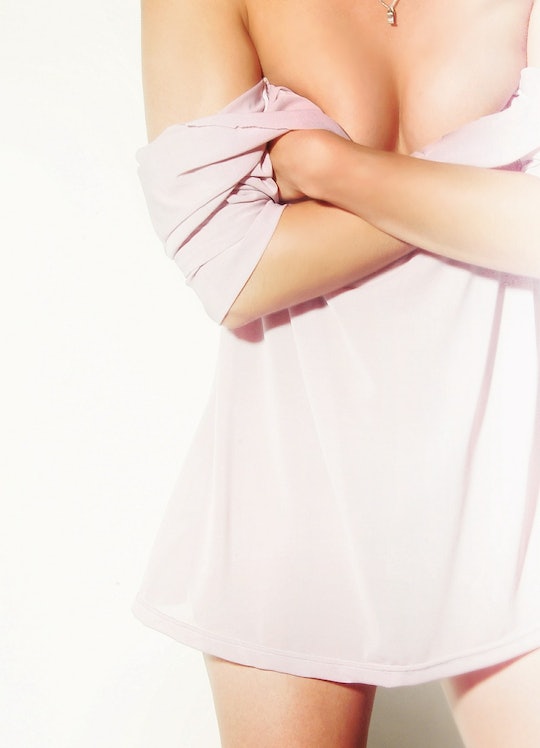 What Happens To Your Breasts During Sex? A Lot More Than You Might Think

During sex, your body does all kinds of fun things you might not realize. From the way your brain's pleasure center sends out good vibes to the rest of your body parts, to the chemicals you release during the act of sex, there's no shortage of truly incredible facts about the body and sexual intercourse. But what happens to your breasts during sex? It's no secret that breasts are considered a major erogenous zone, so it's safe to assume that they've got their own thing going during sex. That's right, your breasts are actually responding, changing, and feeling, during intercourse.

In the next stage, sensation, you begin to feel aroused. Arousal increases your heart rate and blood pressure, which in turn increases your blood flow to your breasts, causing them to swell. According to the United Kingdom's National Health Service (NHS), your breasts can swell up to 25 percent in size during sexual activity because of the increase of blood flow. The NHS also noted that your nipples become erect and more sensitive, and your areolae increase in size during this stage of arousal. Your apocrine glands in your areolae will also begin to release sweat scented pheromones, and though pheromones can't be smelled directly, and there hasn't been a direct link found to sexual attraction and pheromones. A recent study in the Journal of Advanced Research suggests that pheromones play an important part in bonding, especially between mothers and their babies.

During the next stage of arousal, surrender, your breasts and areolae continue to grow. According to Robert L. Crooks and Karla Bauer, authors of Our Sexuality, some women may experience a "sex flush," or vasocongestion, during the surrender stage, that may turn the flesh of their breasts a pink color.

In 2011, CBS News reported that in a study published in the Journal of Sexual Medicine, Dr. Barry Komisaruk discovered a link between nipple stimulation and the release of oxytocin. When your nipples are stimulated during sexual activity, your brain releases oxytocin, the same way it does when you achieve orgasm. Oxytocin is known as the love hormone, which can increase feelings of bonding and intimacy between you and your partner. The study also found that when stimulated, breasts lit up two portions of the brain. The area that receives the chest sensations, and the area that receives the genital sensations. Which is why some women are able to climax from nipple stimulation alone.

So the next time you and your partner are enjoying a romp in the sheets, don't forget about your breasts — they've got a lot to offer.