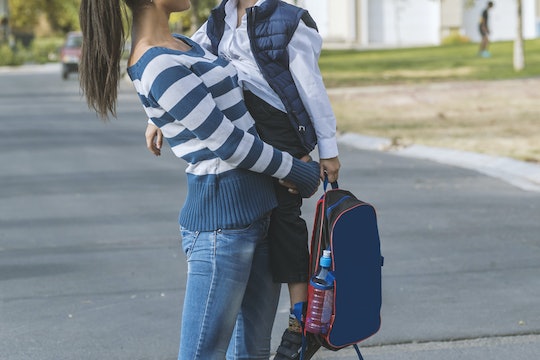 OK, So There's *A Lot* Happening To Your Kid's Brain When You Drop Them Off At School

Thank all the gods it's time for kids to go back to school. I love summer as much as the next person, but holy cow, I'm ready for my kids to have some real structure back in their day. (I also deeply value education, and adore watching them learn and thrive.) So when you're preparing for the school year, there's a lot you probably consider, whether it's their school list or if they'll make friends — it's a lot to take in. But have you ever wondered what happens to your kid's brain when you drop them off at school? Because, clearly, something is happening.

There's an emerging field in research known as "educational neuroscience," that, according to scientists in the field, has a goal joining "biology with cognitive science, development, and education so that education can be grounded more solidly in research on learning and teaching." They're looking at how the brain works inside the classroom, and how the classroom and educational environment affects the brain. They also look into how genetics and educational privilege affects the mean outcome for students. Researchers have found that the interactivity of schooling and the hands-on learning "shape the anatomy and physiology of their brains (and bodies)." So much so that "when we actively control our experience, that experience sculpts the way that our brains work, changing neurons, synapses, and brain activities," as noted in The Journal of Theoretical Social Psychology.

I've always assumed that school shapes our mind in some form or fashion. I mean, it has to, right? That's sort of the whole point. The actual mechanics of it, though? They elude some of even the most lauded researchers. This is largely because the original method of studying the epistemological evolution happening within children has been based on data research as opposed to methodological research. What does that mean? It means that scientists were focused on looking at outcomes from data sets, test scores, surveys, etc, and weren't conducting longitudinal studies that evaluated the brain, the body, and other methods of measuring specific aspects of cognitive development.

I spoke to cognitive research PhD candidate Mark Reardon and asked him what happens to your kid's brain when you drop them off at school. He tells Romper, simply, "A lot." Between the immediate dopamine release of seeing their friends after a long absence, to the adrenaline and cortisol fluctuations that are triggered by the normal nerves of going to school and starting a new year, Reardon adds that "there is some research that shows that even the school environment, if it's positive and engaging or negative and intimidating, can have a huge effect on the brain of the learner."

He says that mostly, though, it's a positive set of manifestations in the brain that shift and grow and manipulate the matter when children begin to learn. "Imagine a neuron," he says. It looks a bit like a skinny birch tree with roots and branches. The roots are the nerve endings, the trunk is the axion, and the branches are the cell body and dendrites. "When your child is in school, each cell is firing and communicating through the air and soil surrounding it, and as those new connections are acquired, the branches — or dendrites — are multiplying, and the soil and air — the synapses — are becoming richer." This is obviously massively simplifying the structure of the neurons and their processes, but it gives you an idea of what is happening.

Reardon says that those hormones he mentioned earlier act upon those little trees, and those neurons control the pituitary gland, which work with the endocrine system which produces the hormones, sending everything back into the loop. In short, dropping your child off at school makes their brains stronger, builds their trees, and the emotions they feel feed the process and can shift development. It's really pretty amazing, and he says that the more that science learns about the process, the more amazing and complex it becomes.

Also, you get a break, so it's doing great things for your brain.