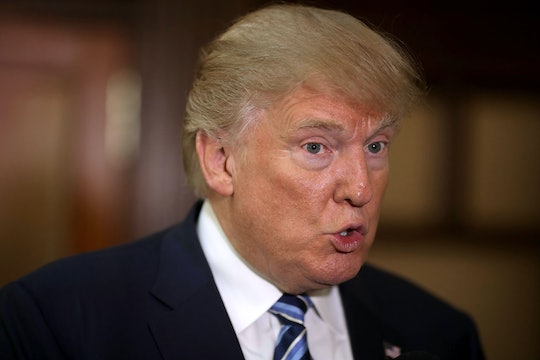 What Happens When A Candidate Contests A Presidential Election? There Needs To Be Evidence

In the weeks leading up to the general election, Republican candidate Donald Trump hinted — multiple times — at contesting the election if he lost. He posted comments about a "rigged" election on social media. During the final presidential election, he wouldn't commit to conceding the election if he lost. And at a rally in Ohio in late October, after saying he reserved his right to challenge "questionable" results, Trump joked, "I will totally accept the results of this great and historic presidential election... if I win!" So, totally hypothetically: what happens when a candidate contests a presidential election? Can they even do such a thing?

As it turns out, a candidate can contest an election — but only on a state-by-state basis, according to CNN. It's important to first understand how a president gets elected into power, of course, since voters aren't technically casting their ballot for president, but rather for a group of "electors" in their state who then represent them in the United States Electoral College. The 538 electors who make it to the Electoral College then cast their votes for president about a month after the general election (this year, Dec. 19), and whichever candidate receives 270 electoral votes wins the presidency.

Okay, so back to Election Day. Each state has its own set of election rules, and most states will allow presidential candidates to challenge results only if the preliminary results are incredibly close. (Some states will actually require their own recount when results are too close, regardless of whether a candidate has called their results into question or not, as was the case with Al Gore in Florida in 2000.)

However, unless candidates can prove that there's been a violation of the constitution, each state resolves challenges under its own laws. So while a candidate could contest a preliminary result (through a lawsuit), each state's supreme court has final say when it comes to arguments over the state's results. "If they were interested in suing, they’d have to go to the particular state, and the state law would dictate if they have standing to sue," Amy Bunk, director of legal affairs and policy at the Office of the Federal Register, told The Boston Globe.

So if a candidate objects to the results of a certain state, he or she has to approach that state with their objections — and the state itself settles any disputes independently. Most disputes, unless backed with evidence (such as reports of voter fraud across the state), would be swiftly dismissed. States have deadlines for reporting their results, so it's in their best interest to stick to them.

Alright, so what happens once things proceed past the state level? Electors would go off to the Electoral College, cast their votes, and then have the votes counted on Jan. 6. Once that's done, if at least one member of the House and one member of the Senate submit and sign an objection, both the House and the Senate would have to congregate (separately) to discuss the objection. For an electoral vote to be rejected, both House and Senate would have to come back together and agree to reject the electoral vote.

In the extremely rare case of the electoral vote being rejected, the vice president (oh hey, Joe Biden) would step into the presidential role until the next president is finalized.

There's quite the system in place, and simply calling an election rigged isn't sufficient to toss results out the window. So if Trump or Democratic candidate Hillary Clinton challenged the presidential results without evidence to back it up, nothing would really change officially. The only real concern would be having a clash of violence from supporters who do believe a candidate's words about a rigged election — with or without the necessary proof.