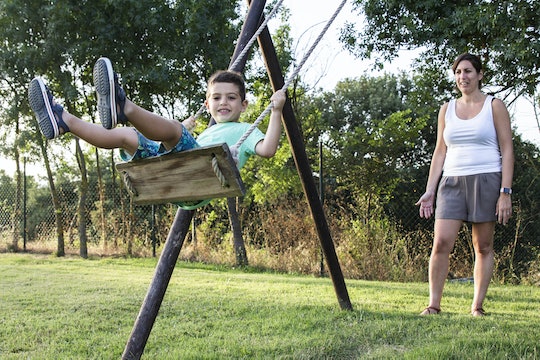 What Happens When A Kid Who Grew Up With No Rules Becomes A Mom?

It had been a long, rainy day, and my toddler and I were both stricken with a restless, near-frantic energy. When our friends arrived for an evening of pizza-making and wine-drinking, we were both relieved. I could have an adult conversation, and my daughter had a partner in crime with whom she could stomp and scream and tear the house up. “Let them knock themselves out,” I said as I popped the cork and the girls began banging pots together. I was done playing disciplinarian for the day. I turned on the oven and began stacking ingredients on the butcher block between sips of wine.

Melanie shook her head. “It smells like something’s burning.”

I opened the oven and was slapped with a cloud of smoke. But the oven was empty. Panicked, I pulled open the broiler drawer. I didn’t think to take the girls out of the kitchen first, and they screamed when flames lashed out, charring the front of the stove. All the fire safety rules got jumbled in my head. Was water good, or would it make things worse? I began stamping on the flames, and caught a glimpse of the inside of the broiler drawer, which I always kept empty. It had been stuffed with dish rags, cloth napkins, and rubber-palmed oven mitts.

“Water!” my friend shouted, scooping up the girls and hauling them out of the kitchen.

It only took a few glasses to put the fire out. No one was injured, the only damage was cosmetic, and my daughter still relishes the opportunity to tell the story of “the fire in mommy’s oven.” Every time she tells it, I laugh along with her.

But something about the incident bugs me. Was I a bad mother for not checking the broiler drawer before turning on the gas? Careless, certainly. And on a scale of one to 10, how bad was my behavior post-fire, fleeing the scene and going out for pizza and wine instead? How many people would shake their heads at me for drinking half the bottle and laughing about the story on the walk home? And being so tired that I went to bed with my daughter and left the mess for my husband to deal with when he came home from work?

When the house is a mess and we’re cranky, is it wrong to pack up the diaper bag, grab my daughter, and head out for an adventure in the park?

Small disasters are a natural part of life, and I often feel that the best thing I can teach my daughter is how to stay calm and dance in the face of misfortune. Other times, I wonder if I’m doing her a disservice by failing to turn her into the careful kind of person who checks the broiler drawer before she lights the stove, every time, even when she’s sure it’s empty. In theory, I want my daughter to approach life carefully, but in practice, I’m teaching her how to be carefree.

When the house is a mess and we’re cranky, is it wrong to pack up the diaper bag, grab my daughter, and head out for an adventure in the park? Part of me feels guilty for not forcing us both to settle down and clean up before having our fun, but it’s a very small part of me. There are only so many times in life when you can walk away from a mess, and bask in the sun and blow bubbles. Isn’t it my duty to show my daughter how important it is to grab those opportunities and run with them?

Carefree is what I know. Growing up, I had a fun mom, a mother who let me turn the basement into a rehearsal space for all the neighborhood bands, who let friends in trouble crash on our couch, who didn’t believe in bedtimes and didn’t mind if I smoked and drank, as long as I was safe about it. She was never judgmental, and I could tell her anything, which I did. Maybe too much. She told me too much, too. Having a friend-mom was cool, but I never really had any boundaries, and have always struggled setting boundaries in my own life. So it’s no surprise that I find setting boundaries for my own free-spirited, curious girl to be one of parenting’s greatest challenges.

What am I teaching her about self-control?

Imposing rules that I myself find arbitrary has never been one of my strengths. Not in my career as a teacher, and certainly not as a mother. Right now, decisions such as whether or not I let my daughter eat ice cream at 9 in the morning don’t feel particularly consequential. But I’m sure the experts who say the personality is established during the first five years of life would disagree. What am I teaching her about self-control? And even if I make the argument that a good deal of personality is owed to a child’s natural temperament, the decisions I make as a parent are going to get increasingly more serious as the years wear on. Will an inner Mama Beast awaken as my daughter begins to venture further without me into more dangerous territories? What if it doesn’t? What if the fine line between carefree and careless just keeps getting blurrier?

I’m sure it will. I’m also sure that I won’t ruin my daughter’s life by letting her leave the bed unmade now and then. I like to think I turned out pretty OK despite my lawless adolescence. I certainly learned how to moderate my own behavior. And while my daughter will certainly not be allowed to sulk and smoke cigarettes all over the Magic Kingdom on family vacations to Disney when she turns 15, I’ll probably let her dye her hair and pierce her nose. It’s all about understanding what rules are worth caring about.

Next time I turn on the stove, I’ll check the broiler drawer first, but I’ll still have picnics in bed on rainy days. I will never be the person who chooses yogurt over ice cream, and deep down, I’m glad my girl isn’t either.