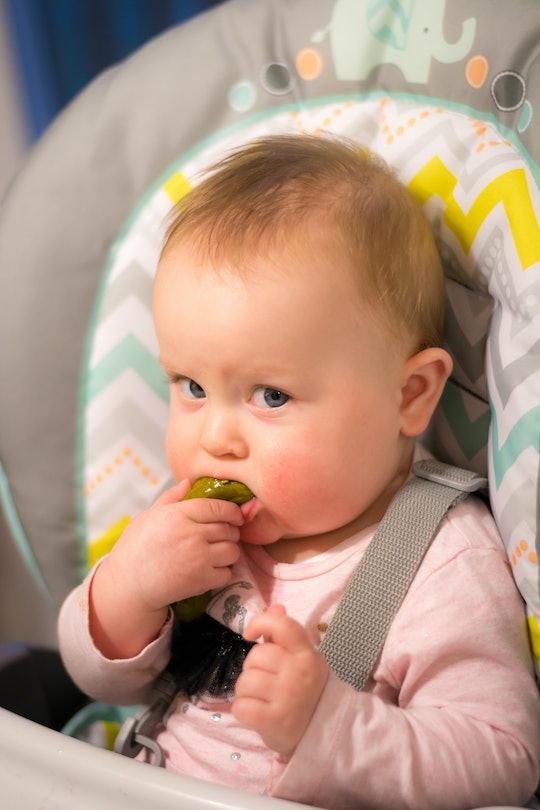 Have you ever given your baby a new food and found yourself laughing at their reaction? If you've introduced your baby to pickles, the answer to that question is probably yes. What happens when babies try pickles for the first time is the silly result of a lot of neurological development factors coming together at once.

"When a baby tries a new food, especially a food with such strong stimuli, like a pickle, the baby's brain quickly learns the relationship between the smell and appearance of the food and its taste," neurologist Heidi Moawad, M.D., and a Healthline Medical Advisor, tells Romper. She continues, "the baby also has an immediate reaction of liking or disliking" the new food. Since all of this information is being processed so quickly (like, within one bite) and babies don't have the ability to regulate their emotional responses, their face will express exactly what they are thinking and feeling in that moment.

In all fairness, an adult's brain makes these same relationships and connections, but there are a few additional factors that come into play when looking at a grown-up's reaction to a new food as opposed to a baby's. "Babies don't have the same ability to moderate their food, so they may take a huge bite, unlike an adult who might modify a strong tasting food by doing something like putting it on a cracker," Dr. Moawad says. Another reason the reaction is so different is because adults are able to overcome some instincts better than babies can. "We are programmed to reject food that tastes too weird so that we won't eat something dangerous," Dr. Moawad explains. "Adults can overcome that instinct if there is a desirable reward (taking medicine, drinking coffee or alcohol, food that creates an aftertaste they like) but babies just react without thinking ahead." Finally, Dr. Moawad says the difference in reaction also comes down to manners because "babies aren't polite... if a baby really dislikes a food, they won't try to hide it with a polite smile to avoid hurting the feelings of whoever offered it to them."

Since their reaction (and possibly grimace) is so strong, a parent may worry that their baby is in some kind of pain from the sour taste. Don't worry; they're not hurting from the experience, just surprised. This shock will actually help them build somewhat of a future mental safety plan when exposed to the food again. "They might learn to avoid [pickles] in the same way they avoid something painful," says Dr. Moawad, "like a sharp edge or something that's too hot." This avoidance won't necessarily last forever, though, because "babies do adjust their tastes and will accept some tastes that they didn't like before."

If you really want your little one to love a salty and sour pickle, some research suggests you'll get the best result if you expose them to a wide variety of fruits from 6 months on and wait until they're close to a year old to introduce pickles. One study published in the British Journal of Nutrition looked at the correlation between acceptance/tolerance of sour taste and fruit intake in 18-month-old children and found that babies who accepted the highest sour concentration were those who regularly ate a wide variety of fruits from six-months on. Another study published in the same journal found that over the course of a baby's first year of life their acceptance of salty tastes increases significantly.

Your baby's tastes will evolve over time, so don't sweat it if they turn their nose up to pickles for now. It might not always be that way. Just enjoy their funny, dramatic reactions to new foods... and maybe try to catch a few of them on video so you can giggle at them for years to come.