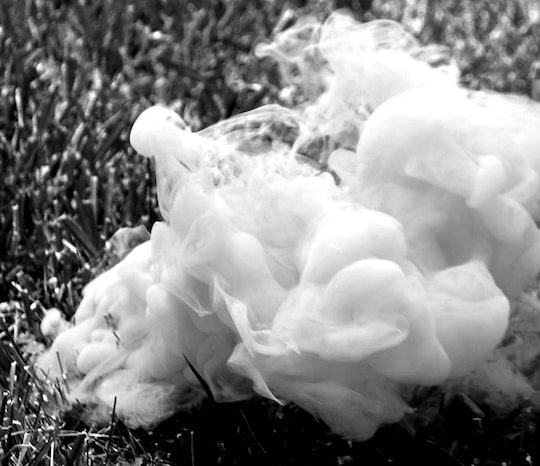 What Happens When You Get Your Vagina Smoked?

It used to be, if you wanted to treat your vagina to something special, you could have it Vajazzeled with rhinestones and glitter. But now that one of Bali's oldest pre-wedding traditions is making its way to spas across the globe, women everywhere have a chance to try vaginal smoking. The name alone can conjure up enough images to set your imagination on fire, so let me clarify for you exactly what happens when you get your vagina smoked.

Before you pick up the phone to book your appointment, be aware that this vaginal refreshment has a few aliases. Also known by the names vaginal fogging, venus smoke, yoni steaming, and variations thereof, are all the same thing. This treatment, which is centered around the smoke from a bundle of herbs called ratus, is a custom that has been practiced by Javaneese women for years, according to BaliLive.net. Originally reserved for those preparing for their wedding day, vaginal smoking is now being promoted as a vaginal care option for women, nuptials or not.

As Real Bali's website said, since the treatment is meant to cleanse, cure, and beautify the vagina, the ratus plays an important role. (Really, ratus is a fancy way of saying herbs that smell pretty.) Rosemary, lavender, and rose petals are a few of the most commonly used herbs for vaginal steaming, preferred for their delightful scent. Each herb — beyond their fragrance — also has a specific quality that will benefit the vagina. While some like rosemary and marigold are cleansing, others such as basil and rose petals have relaxing properties.

Once the herbs have been lit, you sit on a chair with a hole cut in the middle, and allow the smoke to make its way to the vagina. As suggested by psychosexual therapist Dianna Palimere, wearing a loose fitting gown is recommended so none of the precious ratus smoke escapes. Think of it as hot boxing for your lady parts — soak up all that good stuff, and don't let any get slip through the cracks — because after the smoke is absorbed by the vagina, the magic really starts to happen.

As Dr. Rosita Arvigo, a naprapathic physician and herbalist told Mind Body Green, there is a long list of benefits to vaginal smoking. Since vaginal tissue is very porous, after the steam opens the pores, the medicinal qualities of the herbs are able to be absorbed. Aside from smelling like a fresh bouquet, smoking has been known to help with PMS symptoms, treat yeast infections, and lessen the symptoms of menopause.

If you can take the heat, most steaming sessions run between 20 to 45 minutes, but you want to want to make sure to take a break if you start to feel too hot or experience a burning sensation. Also of note, pregnant and menstruating women will have to be patient, since vaginal smoking during these times is a no-no. Prime time for steaming is either right before or right after your period, according to Holistic Wisdom.

If you're considering taking your vagina to detox for a steam, be prepared to drop between $20 to $75 per treatment and make sure to keep an open mind about the results. Although many women swear by the process, Women's Health cautions that most doctors are still skeptical due to the lack of science-based research. But if you're up for the experience, give it a try. You never know, it may be just the vacation your vagina's been needing.