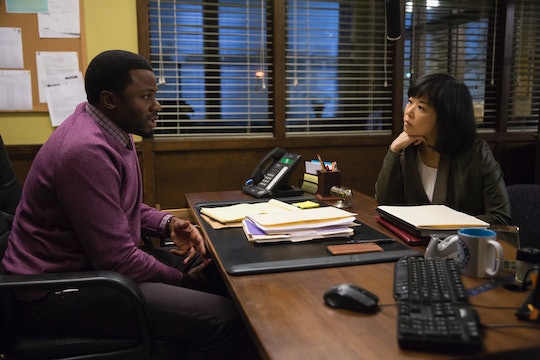 The Trial In '13 Reasons Why' Leaves Fans Guessing

Warning: spoilers from Episode 13 ahead! Though 13 Reasons Why was mainly about Clay Jensen discovering what led his classmate Hannah Baker to end her life, there was also a bigger plotline going on. Hannah's parents were suing the school because of Hannah's death and by the end of the season the case still wasn't resolved. So what happens with Hannah's trial on 13 Reasons Why? It's hard to say, especially since the trial plotline was never in the book from which this series is based.

As the show went on, it became clear Hannah's parents had a good case against the school. Hannah was bullied and she did ask for help twice, first anonymously in her peer communications class, then when she spoke to her guidance counselor Mr. Porter. Though Mr. Porter thought he destroyed the evidence by ripping out the day in his planner when Hannah had made an appointment to meet with him, it turned out that Hannah had actually recorded their conversation and put it on the last cassette tape.

On top of that, Clay then recorded Bryce's confession to raping Hannah and put it on the other side of the last tape before giving all the tapes to Mr. Porter. Whether or not Mr. Porter actually does what he should, which is turn over the tapes to the proper authorities, remains to be seen. However, Tony put the audio files from the tapes on a USB and gave it to Hannah's parents, so they at least can know the truth. Still, even though Hannah's mom knew she had the tapes when Tyler brought them up in his deposition, Hannah's parents decided to keep the files to themselves. At least, for now.

However, by the end of the finale, her parents began listening to the recordings and I find it hard to believe they won't bring the tapes into evidence once they hear all the horrible things that happened to their daughter and that Mr. Porter was aware that Hannah was struggling. With the tapes, the case becomes an easy victory for her parents.

The tapes provide proof that Hannah witnessed her classmates commit multiple crimes, that at least one of her classmates (Zach) knew Hannah was struggling, and most importantly that Mr. Porter didn't report what Hannah told him or take it as seriously as he should have.

Right now it's unclear if there will be a second season of the show, but if there is, it may continue to explore the trial and there's no doubt Hannah's parents would win the case. Although this victory will never make up for losing their child, at least they'd finally know why Hannah did it and hopefully find a way to move on and help ensure something like this never happens to another kid ever again.