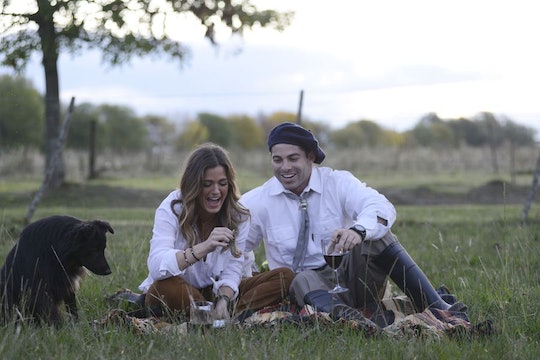 What Has Alex From 'The Bachelorette' Been Up To? He's Enjoying Family Time

In the wake of Chad's departure on The Bachelorette, one man tried to step up to the challenge and fill the role of Most Obnoxious Guy In The House. That man was Alex, but unfortunately he couldn't quite fill Chad's lunch meat-eating shoes; he's mostly just annoying. Alex is about as petty as one can get, constantly trash-talking the other guys and being ungrateful that JoJo decided to keep him around when it looked like he was about to be eliminated. Um, Alex? That's supposed to be a good thing. Despite the fact that JoJo recently gave him a save, it doesn't seem like Alex could possibly last that much longer on The Bachelorette. But what has Alex been up to since filming ended?

Most of the guys have spent their post-show time enjoying the show as it airs via livetweeting or amusing Instagram posts. Alex is no different; he definitely seems to be enjoying his downtime. He's also been spending a lot of time with his family, including his twin brother Adam and his little nieces and nephews, posting some pretty cute pictures that might make you forget just how sigh-inducing all of his Bachelorette behavior can be. Sort of.

Alex is also a major fan of pictures of himself, because that's what 90 percent of his Instagram is, alongside seemingly random captions (Alex, what does checking your closet for the Boogeyman have to do with a picture of you wearing a hoodie?). But when he's not glorying in all that is Alex or talking up his time on The Bachelorette, Alex seems to be busy enjoying himself, whether it's hanging with his dog or hanging with his brother.

He's also gotten some less than positive press. RadarOnline reported that Alex was arrested in 2011 for "prowling." Apparently he and a friend were loitering outside a sorority house with a hammer, with the intention of "taking the sorority letters off of the house." Kind of random and strange as crimes go, but maybe it would work for JoJo – it seems that she likes bad boys, after all.

Considering he was close to getting sent home once, it doesn't seem like Alex is necessarily long for this world on The Bachelorette. It must be tough for JoJo with so few guys left in the competition but she's got to start making some hard decisions, and Alex might not make the cut. The good news is that there doesn't seem to be any hard feelings: Alex looks like he's doing just fine without the show.