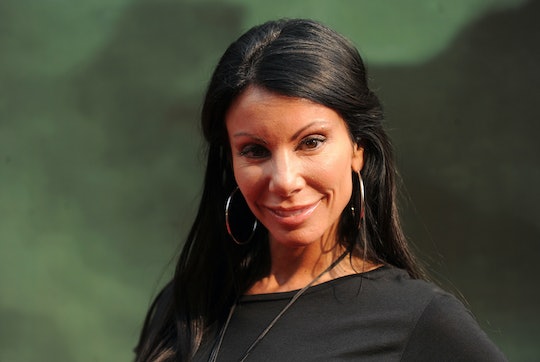 Danielle Staub Has Been Keeping Busy Since 'RHONJ'

I don't know about you, but I've been silently marking the days until the Real Housewives of New Jersey premieres this week, if only because Danielle Staub is back. It's been a long time since she left the show in 2010 just after two seasons and given that the new trailer shows her getting along with Teresa Giudice, it's totally legit to wonder what Danielle Staub has been doing since Real Housewives Of New Jersey.

If you missed the early days of RHONJ, you might best know Danielle as the woman that Teresa flipped a table on in the Season 1 finale. That video clip has become pretty iconic: Not only does the table flip sort of sum up the intensity of the Jersey wives' fights (the RHOC and RHOBH casts have nothing on these East Coast women) but it's also been used as a before and after marker symbol for the show's most famous characters.

Teresa, for example, wrote a book called Turning The Tables after getting out of prison, promising that she'd be a whole new, calm person. Bringing back Danielle is a good way to gauge how well that attitude adjustment is going to work. Maybe Danielle's changed, too, after all these years. Here's what she's been doing since we last saw her...

She & Teresa Are Friends Now

They are grown ups, after all. Staub left the show to move "onward and upward" after having her extensions pulled out by Laurita's daughter and being threatened by Teresa. But last year, Teresa reached out to her old friend and apologized. They even did yoga together. Danielle told Mic that she never forgets, but she thinks Teresa genuinely has changed since the bad old days:

We went and had Jamba Juice and discussed everything that had happened. A little bit of tears because I definitely feel like she was heartfelt with the way she wants to acknowledge how she treated me and my children. It takes a really big person to own up to your mistakes. I forgive.

Although her newfound bestie accused her of being engaged "19 times" during their epic finale fight all those years ago, Staub has definitely been engaged at least twice since we last saw her on our small screens. In 2015, she announced her engagement to Joseph Masalta, though their relationship fell apart.

This spring, she announced her engagement to Marty Caffrey. You can follow their romance on Instagram and, apparently, on Season 8. The proposal was reportedly filmed for the show. YAS.

Danielle and Marty apparently went out on a double date with new RHONJ cast member Margaret Josephs and her husband. Uh, oh — alliances might have already been made.

She Tried Other Reality Shows

Upon leaving RHONJ, Danielle said that she wanted her own show. That didn't quite work out, but she did appear on VH1's Famous Food, a competition show where contestants won a chance to open a West Hollywood restaurant. Danielle actually won, along with Three 6 Mafia's DJ Paul. But five months after the opening of the restaurant, Lemon Basket, it closed down.

Her Daughters Are All Grown Up

You might remember Danielle's two gorgeous daughters, Christine and Jillian, from back in the day. If you see them on the show this time around, you will be shocked to see how old they are now. Christine is 23 years old and just graduated from Seton Hall University last year and 19-year-old Jillian is enrolled at Monmouth University. But that doesn't mean they don't love spending QT with their mom, if Instagram is any indication.

Between finding love, raising her family, and trying her hand at new things, Danielle has been busy since fans last saw her. Who knows what this year will bring for the Bravo legend?