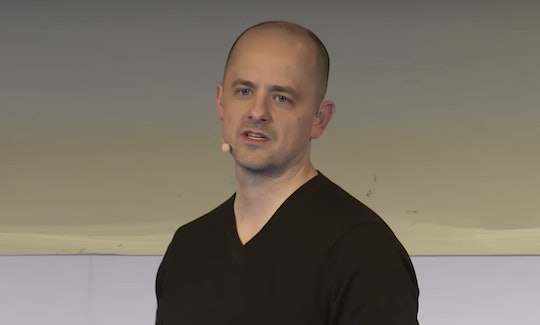 What Has Evan McMullin Said About Donald Trump? He's Not Exactly The Don's Biggest Fan

Even though the Republican Party has officially nominated its presidential ticket for the general election in November, there are some conservative holdouts who have decided that bankrupted billionaire and wannabe world leader Donald Trump just isn't a feasible option. On Monday, 40-year-old Evan McMullin, Chief Policy Director at U.S. House of Representatives, announced an independent run for president. While not officially backed by the GOP, McMullin is known for his work with Republicans on the Hill. As he sizes up his competition, what has Evan McMullin said about Trump in the past? McMullin certainly hasn't been shy about his feelings for Trump.

McMullin's relatively sparse Twitter account includes many mentions of @realDonaldTrump — and he has been unabashedly critical of Trump since January, just weeks before Trump won the New Hampshire primary. McMullin has positioned himself as a conservative alternative to Trump, making full use of the #NeverTrump hashtag on Twitter as well. Here's what else McMullin has had to say about Trump.

McMullin has thrown himself in the ring as a better third-party option to the current two-party options. In a statement to ABC News Monday, McMullin said:

It’s never too late to do the right thing, and America deserves much better than either Donald Trump or Hillary Clinton can offer us. I humbly offer myself as a leader who can give millions of disaffected Americans a conservative choice for President.

Trump's Campaign Is A "Circus"

Early on in the primary season, McMullin was quick to point out on Twitter that even just seven months ago, Trump's campaign was already a circus act with which the media could barely keep pace.

Anger Is Not A Substitute For Leadership

As many political analysts noted at the Republican National Convention last month, Trump was all about the doom and gloom facing the country, using fear-mongering as a way to scare voters into backing him this fall. As McMullin noted back in January, "anger is [the] fool's gold of this cycle."

After Trump's many primary victories on Super Tuesday in March, McMullin basically managed to call Trump a racist in probably the classiest way possible.

Like so many others, McMullin wants to know what Trump is hiding in his tax returns with his repeated refusals to release his tax returns to the public. In May, McMullin tweeted: "Americans deserve to see @realDonaldTrump's tax returns immediately. If he won't be transparent on this, how could we trust his presidency?"

Trump Is An Authoritarian

McMullin hasn't been afraid to call out Trump on his complete lack of foreign policy, as demonstrated in these two tweets from March and July.

While it remains to be seen what McMullin has to say about Democratic nominee Hillary Clinton, as well as what his positions on the issues are, McMullin has clearly established himself as the Trump alternative this election season: Too bad McMullin has already missed the ballot deadline in 26 states.