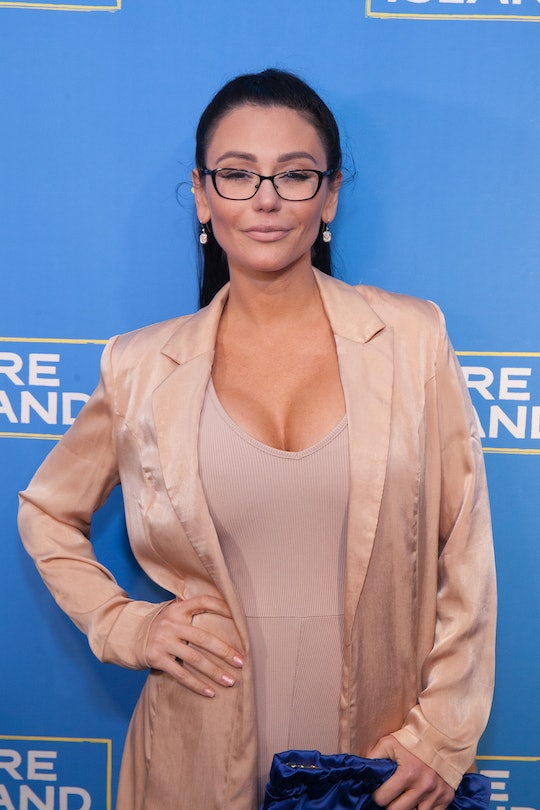 JWoww Has Been In More Reality Shows Than Just 'Jersey Shore'

Part of me always knew Jersey Shore would be back, though I'm very curious about where the cast has been since the last episode. Just take JWoww, for example. What has Jenni "JWoww" Farley been doing since Jersey Shore? Well, being on other reality shows (duh), but that's not all.

Right after the original Jersey Shore went off the air in 2012, JWoww and Snooki got a reality show of their own, aptly titled Snooki and Jwoww. The show lasted an impressive four seasons and ended in 2015. While that show was filming, the two moved in together in a former firehouse. The series largely focused on Snooki and JWoww's "growing up" — primarily being in serious relationships, eventually getting married, and having children.

In 2014, JWoww and her longtime boyfriend, Roger Mathews, welcomed their daughter, Meilani. "Jenni and Roger are so excited to welcome the newest guidette Meilani Alexandra Mathews to the world weighing 7lbs and 13 ounces," JWoww's rep told Us Weekly at the time. "Meilani and her parents are doing great and are happy and healthy," the rep continued. "Meilani is already looking to trade her baby bottle for barbells." Jersey Shore fans will remember that Roger was a big fixture in JWoww's life even back then, so this was a huge thrill for them. JWoww and Roger had been engaged since 2012, and in 2015 they got married.

However, they didn't just celebrate their nuptials that day; JWoww and Roger announced that she was pregnant with her second child on the day of their wedding. "This was one of the hardest secrets to keep but it was one of the most memorable parts of our wedding," JWoww told E! News. "The reaction from everyone was priceless. Roger and I only told our publicist and our nanny that we were expecting, so to watch everyone's face when Roger announced it was priceless." JWoww gave birth to her son, Greyson Valor Mathews, in 2016. This time, she made the announcement in an Instagram post.

"So blessed to welcome our precious son Greyson Valor Mathews," she wrote in the caption. "He arrived healthy at 6:03pm tonight and the most beautiful part is Roger got to deliver him with our doctor. Our family is complete!"

MTV's Snooki and JWoww may have ended in 2015, but they also had a go90 show called Snooki and JWoww: Moms With Attitude, where episodes were 10-minute snippets of their lives as mothers. The last episode aired five months ago, so it's up in the air whether the show will continue. But hey, Jersey Shore is coming back, so I can't complain. Beyond other reality shows with Snooki, JWoww's been keeping busy on other TV projects like Worst Cooks in America and Marriage Boot Camp. She additionally has her own line of tanning products from Australian Gold, which is extraordinarily fitting.

So, yeah, JWoww has certainly not been sitting around since Jersey Shore ended. Now that she's back, she's in a totally different place in her life than when the original show began. She's married with two kids... will she want to go to Karma every night like before? Maybe not, but I'm sure viewers will see her going out multiple times throughout the Jersey Shore Family Vacation season.

Judging from the fact that she and Snooki have been doing other reality shows, and by this sneak peek of Jersey Shore Family Vacation where they're literally on the floor getting ready to go out, nothing has changed with their friendship. Has JWoww's relationships with the other cast members changed? Viewers will just have to wait and see.