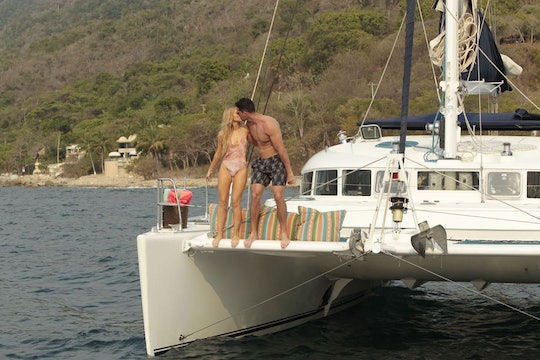 What Has Josh Murray Said About 'Bachelor In Paradise'? He's Made His Opinions Known

Josh Murray has been a lightning pole for drama on Bachelor in Paradise from the very first moment he appeared. First an old romantic rivalry with Nick Viall reared its head when they both went after the same girl yet again and Josh won out yet again. Their first shared ex, Andi Dorfman, had a contentious breakup with Josh after which she published a book describing him as emotionally abusive. Those allegations have come up on BiP though Josh has mostly shaken them off in favor of making gross noises while eating pizza/kissing Amanda. Josh still got the girl, but he's not really coming out of the situation looking great. So what has Josh said about his BiP portrayal?

Josh has been making his feelings known on Twitter as each episode airs, in between motivational Joel Osteen retweets. He's had something to say about it all: his intense amount of sweating, the seemingly ceaseless moaning, and even his brief beach love affair with pizza. But aside from jokey comments about all those ridiculous BiP moments, Josh has tried to combat his bad press a little bit and defend himself against what people have had to say – or at least make it seem like he doesn't care at all.

"Take it or leave it, always gonna be myself no matter what," one tweet from Josh reads. "Genuinely wish happiness for all those on the show, they all deserve it." Which was followed soon after by, "Sucker punch after sucker punch makes me feel even more thankful for the life I have." So, just a reminder from Josh that he's dealing with so much opposition, even though it's okay because everything has worked out for him anyway. Which is kind of Josh's whole story this year on BiP: he may be dealing with drama from past and present cast mates both on and off camera, but he still came out of it with the girl and the pizza.

However, Josh hasn't just used Twitter to stand up for himself. He's tweeted support for other couples on the show and, of course, for Amanda. "Pretty sure Amanda isn't an object, nobody can take her, how absurd," Josh wrote, which is something one would think didn't need to be said. Though it is the point of the show, all the petty fighting over Amanda – which seems to treat her more as a prize or a bartering chip than a person – isn't doing anyone involved any favors. She's an adult who can make her own decisions (even if other people very much do not agree with those decisions).

But most importantly: thank god Josh is as done with that over the top moan as everyone else.