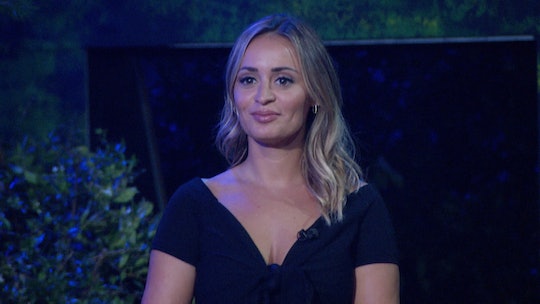 Season 21 of Big Brother is in full swing, and on the most recent episode, fans were treated to a blast from the past. When Nick, Cliff, Jessica, Michie, Kathryn, and Christie head to the backyard for this week’s Veto Competition, they find Season 20 alumni Kaitlyn Herman waiting there to host it. It’s been a while since fans have seen her, so what has Kaitlyn been up to since Big Brother?

While she didn’t make it too far into the competition during her season, Kaitlyn is probably one of the most memorable players of the franchise. Not only did she evict some of the most popular players in the house, she also spawned some controversy when she said the “n” word while quoting a Drake song during a live feed, according to The Hollywood Reporter. She was the fourth person to get evicted in Season 20 of Big Brother, and since then, she’s remained an outspoken fan and follower of the series.

For the most part, it looks like Kaitlyn has been busy with her business, Kait Coaching. According to her company’s website, as a certified Life Coach, Kaitlyn helps people find ways to live a more fulfilling life. “Whether you're 23 or 63, I will help you navigate your life to find that purpose,” her website reads. “I will help you live an authentic life that you've only dreamed of living — I will guide you in the right direction so that you're living every day with immense gratitude. And lastly, I will help you see life through a lens of love, not fear. Through all of this, you'll be guided to achieve inner peace and true happiness for the rest of your life.”

When talking to JC Mounduix for Afterbuzz, Kaitlyn revealed that she’s transitioning her business to exclusively coach reality TV stars who have trouble finding direction. She told him that after being evicted from the house, and receiving so much backlash, she went through a lot of trauma, so she’s now focused on laying low, being well and helping others.

On her social media pages, Kaitlyn posts regular updates about herself, general self-care advice, and she also takes over Big Brother’s Instagram account from time to time. She comments regularly about the cast and events of the season, and in her interview with JC, she hinted that she would love to return to the Big Brother house. “Yeah, I’ll go back into the house,” she tells him. “I think that part of me feels like I would be 50/50 about it, but obviously if I was given the chance I would — I would love a redemption story.”

Well, it looks like Kaitlyn got her wish. In the latest episode, she returned to the house as a host, not a contestant, and without the pressure of winning, she seemed much more relaxed. It’s unclear if she’ll be coming back to host more challenges, so fans will have to keep an eye out for her as the season progresses.