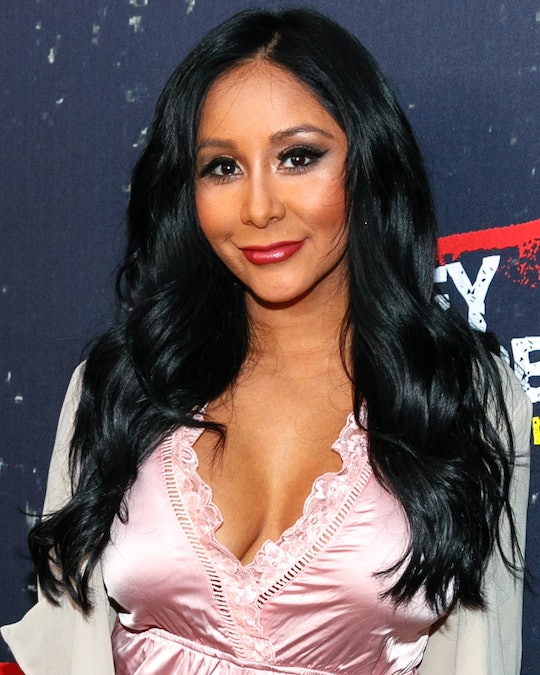 Snooki Has Remained In The Spotlight Long After 'Jersey Shore' Ended

We're currently in a golden age of nostalgia TV, whether we want to be or not, and MTV is getting in on the action by reuniting the cast of one of its most memorable — and most polarizing — shows. This April, Jersey Shore Family Vacation will bring Snooki, JWoww, The Situation, Ronnie, Vinny, Pauly, and Deena back together for a month at a beach house in Miami. So what has Snooki been doing since Jersey Shore? As the trailer for Family Vacation teases, the original crew has pulled off five kids and five marriages between them, and Snooki has contributed to that mix.

In 2014, she married Jionni LaValle, whom we saw intermittently in the final seasons of Jersey Shore. The couple had just given birth to their second child, Giovanna Marie, two months earlier. Their first child, Lorenzo Dominic, was born in 2012, five months after the couple announced their engagement. The family currently lives together in Florham Park, New Jersey.

Jersey Shore ran on MTV for six seasons from 2009 to 2012. Snooki was an original cast member and remained on the series for all six of those seasons. Right after the show wrapped, however, Snooki landed a spin-off series with Jenni Farley called Snooki & Jwoww, chronicling their adventures as roommates and best friends through pregnancy and motherhood. It ran for an additional 4 seasons, through 2015.

After Snooki & Jwoww wrapped on MTV, the stars squeezed a couple more seasons of a web series out of it called Snooki & JWOWW: Moms With Attitude. It was produced by AwesomenessTV and presented by go90, and it depicted how they balanced their hard-partying brand with motherhood as they got older. The second season wrapped late last year, just in time to shoot the Jersey Shore reboot. In 2016, Snooki and her husband Jionni also starred on an f.y.i. reality series called Nicole & Jionni's Shore Flip, which, you guessed it, featured them flipping houses together on the Jersey Shore. Like a Real Housewives of New Jersey, Jr., Jionni would take over contracting while Snooki designed the interiors of homes along the Jersey Shore.

Snooki has also made her way through the celebrity competition reality show circuit. She competed on Season 17 of Dancing With the Stars, partnered with Sasha Farber, and she also appeared on the first Trump-less Celebrity Apprentice — dubbed The New Celebrity Apprentice — after the 2016 election. She found something of a foothold with WWE Monday Night Raw, making a handful of successful appearances throughout 2011 and 2012. (One of her signature moves was called the Jersey Slap.) And then, of course, there's her book collection. Snooki has penned three books since Jersey Shore's premiere: a novel called A Shore Thing (2011) and its sequel Gorilla Beach (2012), as well as a part-memoir, part-how-to book called Confessions of a Guidette (2012).

Given Jersey Shore's global appeal when it first aired (and multiple international versions from The U.K. to Warsaw), Jersey Shore Family Vacation has the honor of being MTV's first ever global time and date premiere — meaning it will be the first time the network premieres a show globally with the same airdate and time, so the entire world can experience the series premiere at once. It's already been picked up for a second season ahead of the premiere, so MTV is clearly banking on success. And considering what a vital part of that success Snooki was the first time around, she'll probably be a delight to watch six years later.