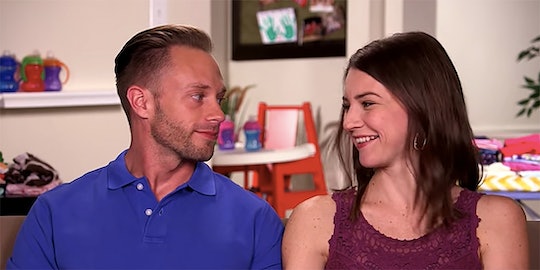 When OutDaughtered premiered on TLC in May 2016, many people fell in love with Danielle and Adam Busby's six adorable kiddos. From the couple's quintuplets (Ava, Olivia, Hazel, Riley, and Parker) to their eldest daughter, Blayke, it goes without saying that there's a ton of cuteness to go around in the Busby household. And now that OutDaughtered is officially renewed for Season 3 (woot woot), people are curious about what the Busby family has been up to since fans saw them last. Season 2 wrapped up in September 2017 and a lot can transpire in seven months. That being said, here are all the Busby milestones you might have missed.

Although OutDaughtered is beloved by many, it took TLC a hot minute to renew the show for Season 3. The network's hesitation was frustrating, to say the least, and Danielle touched on the delay back in March. When Danielle was asked about whether the series was renewed, she responded, according to InTouchWeekly: "Not at this time, but maybe one day."

Of course, "one day" isn't a particularly hopeful phrase. But the good news is TLC ultimately did decide to renew the series, and Season 3 will premiere later this year, according to People.

So, to celebrate this news, here is what the Busby family has been up to these past seven months.

Adam & Danielle Raised Awareness For An Important Cause

Some fans might remember that Adam suffered from postpartum depression shortly after the quints were born in April 2015. “Overnight, when we had the babies, it just kind of threw my mind, threw my body for a loop,” Busby confided to friends during an episode of OutDaughtered, according to People. “Just like, the sheer terror of wondering if your freaking kids are going to make it for three months while they’re in the NICU, to this massive burden of responsibility.”

Although it's unfortunate to hear that Adam struggled with this issue, the upside is that he continues to draw awareness to paternal postpartum depression. "Had a great day today in Washington DC. I was the keynote speaker at The infant health policy summit, raising awareness for paternal post partum [sic] depression," Adam captioned an October 2017 snap of himself and Danielle.

Yes and yes. Fingers crossed that Adam's remarks are featured on the show's upcoming season. It goes without saying that this type of advocacy is so important.

The Family's Halloween Costumes Were Adorable

One of the benefits of having a gaggle of kids is that you get to dress them up in adorable Halloween costumes. Case in point: Adam and Danielle's quints donned *adorable* astronaut-themed ensembles for the holiday.

The Quints Saw Snow For The First Time

Snow is typically exciting for any child, but it's especially thrilling for kids who live in warmer climates. So, when it unexpectedly snowed in the Busby's home of League City, Texas, in early December 2017, the quints took full advantage of the rare occurrence.

In a cute video documenting the quints' first meeting with wintry weather, the girls throw snowballs at Adam and eat snowflakes. So much cuteness, so little time.

When you're a reality star, it's not uncommon for divorce rumors to hit the internet every so often. Although most celebrities tend to ignore the fan chatter, Adam decided to address the breakup theories surrounding his relationship directly.

When one fan threatened to be "done" with TLC if Adam and Danielle ever get a divorce, the dad replied on Dec. 6, 2017, according to Twitter: "Guess you will be a lifelong @TLC viewer. The D word isn’t in our vocabulary. I love my wife more than the day i said 'I DO.' We are the real deal."

There Was A Little Controversy...

Parenting drama is to be expected when you life in the public eye. And this drawback to fame is something Adam and Danielle personally dealt with in February, after some fans questioned why Blayke wore lipstick to a school dance.

"The dark red lipstick is slightly inappropriate for a young girl," commented on a picture of Blayke and Adam, according to Instagram.

Another chimed in, writing, "That lipstick looks ridiculous on her."

But Adam had no tolerance for the backlash. Adam said to fans, according to Instagram:

That’s the whole point. She is a kid that loves dress up. This was a night just for her and to get dressed up. she wanted to do her nails and wear red lipstick, so I allowed it. It made the night that much special for her. I don’t need your approval.

Although it might be hard to believe, the quints turned 3 on Sunday and Blayke celebrated her 7th birthday on April 5. Time moves by so quickly, doesn't it?

And to celebrate all these birthdays, Danielle and Adam threw the girls a joint poop-themed party. Because why not. “Blayke and the quints birthday party was a blast,” the parents explained to People in a joint statement. “This was our first time doing one big party for all the girls and first party outside our home. Blayke chose the theme ‘Don’t be a party pooper’ because she loves the poop emoji. We loved this idea — one because it was funny and two, because the quints are potty trained and we are celebrating no more poop disasters!” Sounds reasonable to me.