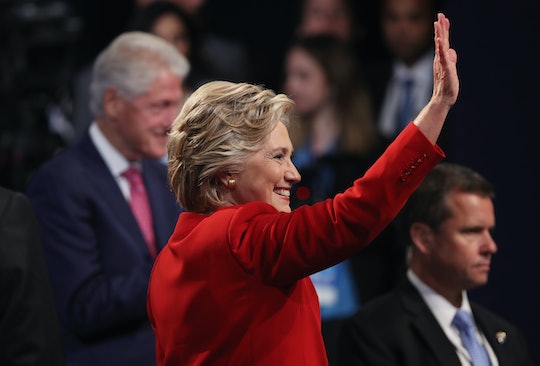 Here we go again. As Hillary Clinton walked into the debate venue at Hofstra University, commentators gasped and commented on what Clinton was wearing. And this isn't the first time her clothes have been widely talked about, according to the National Sun Times. While fashion is sometimes a cultural statement and can send a message, it's unfair to talk about Clinton's style without holding Trump's outfit to the same scrutiny.

Clinton showed up in a full red suit, and news anchors started talking about what it meant and why she decided on it. Perhaps she wanted to "throw us" by donning the opposing party's default color. Perhaps she wanted to "stand out" in any way possible. These are things reporters said in immediate response to Clinton's arrival. And yet, there was not a single comment about Trump's suit, tie, hair, or tan — nothing about his appearance.

But we already knew this would happen, didn't we? Women are always asked about their clothes, criticized for their appearance, and scrutinized for every choice they've made when it comes to their bodies. Back in June, Clinton made the mistake of wearing an Armani jacket to a speech in which she mentioned income inequality, according to CNBC. Never mind the fact that a campaign stylist probably picked out the outfit. But still, reporters, Trump supporters, and undecided viewers pounced because of the apparent "hypocrisy" of donning designer clothes while talking about the American economy.

And yet, no one has mentioned what Trump has been wearing when he's mentioned helping the middle class. He's been known to prefer suits from Italian designer Brioni, which can cost upwards of $7,000 each, according to the New York Post. But I actually had to look that up to find out. I didn't hear about it on Twitter or on television, unlike Clinton and her Armani jacket.

But the Armani "gaffe" wasn't the only incident involving Clinton and fashion that resulted in intense public scrutiny. As recently as September, Clinton was criticized for the type of sunglasses she was wearing. When the candidate stumbled at the September 11 memorial ceremony in New York, some members of the media actually reported that she was wearing dark sunglasses so as to hide her illness.

Clearly, there's a double standard in how we talk about men and women who are public figures. Either we need to talk about Trump's hair, or we need to stop talking about Clinton's pant suits.