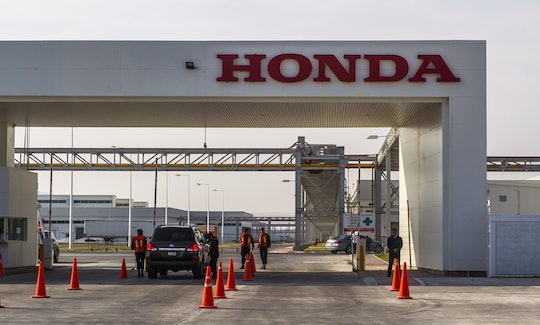 Thousands Of Honda Odysseys Have Been Recalled

For parents everywhere, the safety of their child is incredibly important. Which is why recalls are helpful for parents — as the efforts made in a recall continue to ensure the safety of their children. Minivans are a popular car choice for parents transporting kids to and from home, school, and extracurricular activities throughout the week. One model of minivan— the Honda Odyssey — has been voluntary recalled due to an issue with second row seats. For those wondering which Honda Odysseys have been recalled, they should know that it only effects models made in the years 2011 through 2016.

According to a press release from Honda, approximately 634,000 Odyssey minivans from the 2011 to 2016 model years in the United States are affected by this voluntary recall, which was issued as the result of a slide mechanism in the second row seats. Saying in the press release:

American Honda will voluntary recall approximately 634,000 Odyssey minivans from the 2011-2016 model years to install additional springs and brackets onto the slide mechanism for the outboard second row seats, free of charge. No crashes or injuries have been reported related to this issue which was discovered through warranty claims.

A representative at Honda Customer Service told Romper customers who think they are affected by the voluntary recall can call the Customer Support number at 1-800-999-1009 and provide their car's VIN number to know for sure if they were affected by the recall.

According to Reuters, the recall was issued due to the fact that "second-row seats may not lock in the event of a crash." According to CNBC, no injuries or crashes have been reported related to the issue in either voluntary recall. So what can Honda Odyssey owners, who have a car model from the affected years, do?

If their Odyssey is from a 2016 model year — and one of the 7,600 Odysseys voluntarily recalled — according to the press release, owners should take their car to an authorized Honda dealer who will "inspect the latch mechanism, and if needed, adjust it to proper operation." These customers will begin receiving mailed notification in late January 2017 and are encouraged to take their cars to an authorized dealer for inspection once they receive the notification.

Owners of Odysseys from the 2011 to 2016 model year voluntary recall will be notified through mail in mid-February 2017 if they are affected by the recall. If they are affected, they will receive additional springs and brackets, free of charge, to fix the problem, according to the press release. However, the necessary parts to fix the issue will not be available until spring 2017, due to the large volume of new parts needed.

When it comes to car safety, parents just want the best for their children.