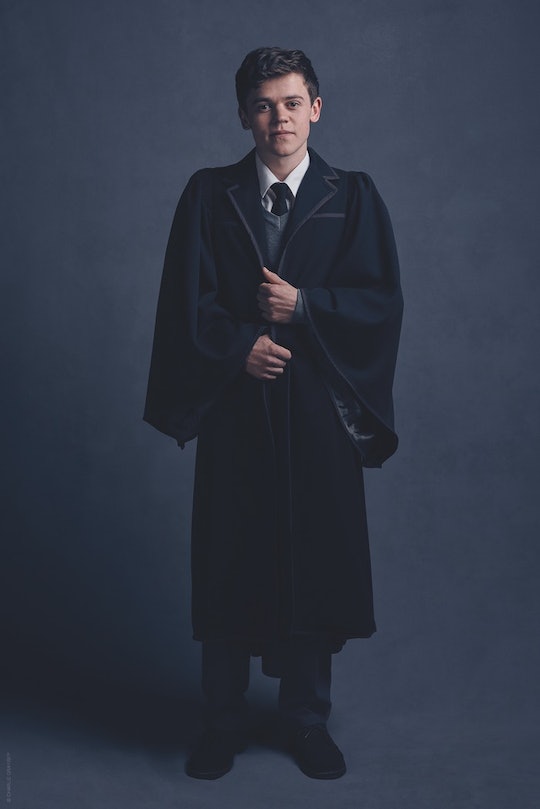 What House Is Albus Severus Potter In? Harry's Son Has A Specific Set Of Robes

In the final pages of Harry Potter and The Deathly Hallows, Harry and Ginny's son Albus Severus exclaims to his teasing older brother, James Sirius, "I won't! I won't be in Slytherin!" Descended from two Gryffindors (pretty famous ones at that), it's understandable that the Potter children would want to follow suit. Now that Harry Potter and The Cursed Child has been released, and it's Albus' turn to sit under the Sorting Hat, many fans are wondering what house is Albus Severus Potter in, after all.

If you haven't had a chance to pick up The Cursed Child, and just can't wait to find out, you're in luck. I have the answer for you. Harry Potter's second son has been sorted into (drumroll please...)

It seems like only yesterday the beloved Chosen One was a young boy of 11, sitting in the Great Hall of Hogwarts School of Witchcraft and Wizardry, desperately whispering, "not Slytherin, not Slytherin." And, despite clearly leaning toward making The Boy Who Lived a Slytherin — a house that would "help (Harry) on the way to greatness" — the Sorting Hat took Harry's choice into account and placed him in Gryffindor.

Almost 23 years later, Albus Potter is faced with the same dilemma. How will he fare as a Slytherin? He was, after all named after one very brave Slytherin. How do Harry and Ginny feel about their son's sorting? If Harry's speech to Albus at the end of Deathy Hallows is any indication, it doesn't matter to them, at all.

“Albus Severus," Harry said quietly, so that nobody but Ginny could hear, and she was tactful enough to pretend to be waving to Rose, who was now on the train, "you were named for two headmasters of Hogwarts. One of them was a Slytherin and he was probably the bravest man I ever knew.”

Becoming a Slytherin isn't the only way Albus is not following in his dear ol' dad's footsteps. Not only is he far from interested in quidditch, but as it turns out, his best mate happens to be none other than a pale boy with blond hair — i.e. Draco Malfoy's son Scorpius

What sort of mischief will Albus get into while wearing the Slytherin robes? Will his placement affect his relationship with the rest of the Potters? There's only one way to find out.