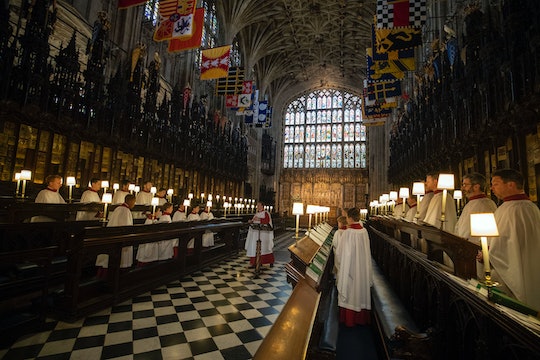 The wedding between Prince Harry and Meghan Markle was all that anyone could talk about for the months leading up to their nuptials. And on Saturday, May 19, when the wedding finally happened, people paid close attention. But how could they not? The royal wedding was, objectively, one of the biggest weddings of the year. So, there is no surprise that people paid attention to all of the details during the wedding ceremony -- like the hymns being sung at the ceremony. If you were wondering what hymn they were singing at the royal wedding, you're not alone. Every single detail counts!

Unlike your average wedding, the royal wedding was a full affair with many parts to it -- Prince Harry and Markle couldn't have just exchanged their vows even if they wanted to. Instead, they had to (along with their guests) participate in a full traditional ceremony inside St. George's Chapel located at Windsor Castle, according to the Guardian. But for a family rich in tradition like the royals, this isn't that surprising. During the hour-long ceremony, according to CNN, there were a lot of components that went into it -- and since the wedding was held at a church, there were quite a bit of religious aspects to the ceremony. This, of course, included the hymns that were sung during the ceremony.

So what hymn was chosen for the wedding? Two hymns were chosen for the big morning, according to the official program from the Royal Wedding — "Slane," a traditional Irish melody and "Cwm Rhondda," written by John Hughes.

It's royal tradition for hymns to be sung during the wedding by both the bride and groom, according to Royal Central. But the specific hymns were kept top secret by the royal family until the ceremony actually happened. However, some people did speculate which hymns would be sung during the ceremony ahead of time -- especially since the royal family is "traditional" when it comes to their wedding hymns, according to Royal Watch, choosing from a small and specific pool of favorites for royal affairs. Before the wedding aired for people all across the world, some experts guessed that Prince Harry and Markle would choose Love Divine, All Loves Excelling, according to Hello!, a hymn that had been featured in many other royal weddings prior to the one on May 19. It was not only chosen for Prince William's wedding to Kate Middleton, according to Hello!, but has also been used at other royal weddings throughout the years and is ripe with tradition -- so it seemed like the obvious choice.

Although the hymns might seem like just a song to viewers at home and wedding guests, they actually play a major role in the royal wedding ceremony, according to the Telegraph. The hymns actually contribute to the mood of the wedding, just like the music you play in your own home. That means the hymns played at the royal wedding definitely set a tone for the major event.