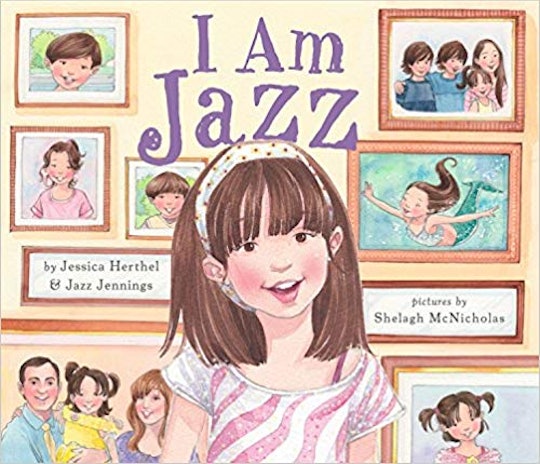 The Book That Finds Space For Gender Freedom *And* Princess Dresses

My torpedo of a daughter was born vivacious and with opinions. She wakes up in the morning, shoots both hands in the air, and howls “Wahoo!” as she runs down the hallway. If she wants to wear a nightgown to school because “It’s a dress,” I let her. And with the #MeToo movement catapulting into the news when she was just a 2-year-old, well, I embraced her tenacity. I certainly was not going to be a mother who would ever shut her daughter up. But I’ll admit that the one thing that drove me a little bonkers internally was her strong desire for everything that screamed princess.

For any holiday or birthday, family adorned my daughter with princess dresses, princess Barbies, and princess books. Quite frankly, I wanted to puke. Cinderella is my nemesis and I’ve explained to my now 4-year-old daughter why the ending to that story is, oh, so very wrong. Yet, she persists. She’ll throw on a pink gown, waltz up to the full-length mirror, smile, and twirl. “Look, Mommy!” she’ll squeal. “I’m a princess!”

I’ll nod and paint a smile on, while in my head, I think, “Can’t I slam-dunk that dress into the garbage can when she naps?”

The idea of my daughter being both ultra-feminine and ultra-feminist got to me. I strongly wanted to raise my children without all of the gender-stereotyping. But both my son and daughter starting saying things like, “Boys wear blue and girls wear pink.” Society is strong, people. I felt like I was failing to crush the old-school norms that so many of us were raised with. Then this past Christmas, “Santa” decided to bring some more progressive books. I Am Jazz by Jessica Herthel and Jazz Jennings, became an immediate favorite with my daughter.

In the book Jazz says, “I have a girl brain but a boy body.” And despite her “boy body,” she always had this immense desire to wear tutus, be a mermaid, and yes, even a princess. Jazz says, “I hardly ever played with trucks or tools or superheroes. Only princesses and mermaid costumes.” But when she went out in public, she felt like she was “telling a lie” when she had to put her “boy” clothes back on.

Her family was confused, and at first, didn’t want Jazz to be Jazz. This was a new territory for them, after all. They loved their child, but were navigating entirely new, and scary, waters. Finally, her parents took her to see a new doctor where they finally learned what the word “transgender” meant.

They let Jazz be Jazz. Her parents told her that same night, “We understand now. Be who you are. We love you no matter what.”

From here, Jazz said, “I could start wearing girl clothes to school and growing my hair long. They even let me change my name to Jazz. Being Jazz felt much more like being ME!”

Not only does this children’s book do an excellent job of defining what it means to be transgender, but my female-identifying daughter fell in love with it. “Jazz is just like me, Mommy!” she said. And while she is not “just” like Jazz, this story has certainly taught me a lot as a parent, too. Jazz was born with a strong desire to be everything the stereotypical girl desires. Everything pink, dresses, dance, and makeup. Jazz made me understand that being ultra-feminine is quite all right. I can teach my daughter to love princess gowns while also not buying into the happy endings that they typically involve. No man needs to save my daughter, trust me.

I had the opportunity to speak with the author, Jessica Herthel, and she admitted that, yes, there has been criticism to the book in regards to this gender stereotype. She said, “The main criticism of our book has been that we stereotypically associate pink and princess with femininity in a way that's bad for girls. However, not only does this ignore the reality of Jazz's childhood-- which is that she did gravitate to all things pink and traditionally "girly,” but it also discounts the deliberate choice we made in light of our intended audience for the book. We wanted to leave no doubt in a 4-year-old reader's mind that the main character of this book was female. And since a book can't be all things to all people, we left the discussion of gender as a construct to another day."

It’s funny. I likely would have been one of those parents who made that same criticism, especially if either I didn’t have a daughter or my daughter wasn’t so drawn to all things stereotyped as girly. But the truth is that some little girls are drawn to all things feminine — just like Jazz. Now, I understand that not only can I raise a strong little feminist, but she can embrace who she was born to be — a princess and a torpedo.

More Like This
I’m No Singer, But My Children Think I Am
From Captions To Gifts, These Are All The Kindergarten Graduation Ideas You Need
34 Instagram Captions Perfect For Preschool Graduation Photos
Raising Us Maybe Wrecked Her Career, But My Mom Is Thriving In Her Second Act