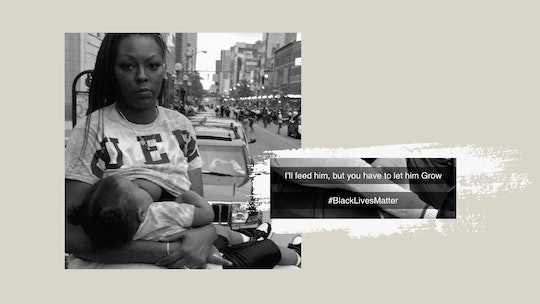 What I Kept Hearing Was George Floyd Calling For His Mother

The story behind a viral moment from Black Lives Matter protests, in which Autumnn Gaines, her wife, 13-year-old, and 1-year-old drove to the state capitol in Ohio to protest, as told to Romper.

My son had started becoming an age where we started having the police conversation and he had said something that resonated with me. He had said to me, "Who do I call, Mom, in an emergency if I'm afraid of the police?" That point was a call to action, for me as a mom, because at that point I had felt like the conversation wasn't enough and I always taught him that actions speak louder than words and that faith without works is dead.

If we don't do anything and if I don't show him something, then he'll be chanting the same thing 15 years from now. I saw this as a learning point for us and also as a point to be a part of history, to expand his black history, expand or give him that experience of the protests that happened and the shoulders that he and I are both standing on right now. So, it was important for me to be involved. The first couple of nights it was intense. We parked right across the street from the state house. They were praying out there. It was really calm.

We had been out there for maybe an hour and my baby was hungry. I tried to supplement the boob before it was time to feed him, but he was not having it. And so, because my 13-year-old was outside of the vehicle, I wanted to sit on the hood, so then I could kind of keep an eye on the whole scene and Justice kept pulling my boob out. So I just gave it to him and it just so happened my wife had taken the photos.

We've been wet nurses since the beginning of time, as far as I'm concerned. We were feeding our owner's children and not being able to feed our own children.

She's always saying like, "He's so spoiled, you always give him the boob, when are you going to wean him off? We're trying to have another baby." It was really just a joking kind of thing. Then I'm like, in my spirit, I don't know how to explain it. It was almost like a quiet moment that I had with myself. It was a profound, like an eye opening for me and I said the word. I said, "Post that picture and put ‘I'll feed them. You have to let them grow,’" because what I kept hearing is Floyd calling for his mother.

That stuck with me because it has to be terrifying, as a mother, for your child to be in distress and there not be anything you can do about it. My intentions were, while my children are yet living and I am yet breathing, I am going to fight for them.

I also wanted to normalize breastfeeding. You won't believe how many times I feed my son out in public and I try to be modest. My son is a very nosy child. He doesn't like to be covered up with blankets and so I try to be modest, but at the end of the day, breastfeeding has been a prominent thing since slavery.

We've been wet nurses since the beginning of time, as far as I'm concerned. We were feeding our owner's children and not being able to feed our own children and there were portraits painted of that. That's in the museum, but it's not OK for me in the real day and age and in real time to feed my child. People were saying, "Why don't you go behind the building? Why don't you go behind the tree?" Do you eat behind the tree? Would you eat your meal behind the dirty building? So I wanted to normalize that. Also, we've sexualized women and women sexualize themselves on social media all the time and we like that, but there was no more skin showing more than it would in a bathing suit, or cleavage, and they tried to dehumanize me breastfeeding. It was such an ugly, nasty thing. "She's so gross" or "Her baby's too big." My son will be 2 in July and so people were saying, "Oh, he's too big to be breastfed."

I get that in our history, we weren't allowed to feed our children from our breasts, so that's not something that we normally see, but I want to normalize it. I didn't get to breastfeed my oldest child. I was young. It wasn't until my second child, they are 11 years apart, that I realized how important breastfeeding was and having a lotus birth was and that just goes back to knowing our rights and knowing as African Americans what we are and are not allowed to do. A lot of people didn't know that you are allowed to leave the umbilical cord at the birthing site, allowed to leave that attached, and allow the baby to have all those nutrients and get all of those things that are due to them. So it's my job, my hope to not only spread awareness about breastfeeding, but that we see the mug shots and we see the autopsy photos, but at one point in time, and it's still a point in time, they're someone's babies, someone's son, someone's daughter.

As a mother, from that standpoint of it, just opening people's eyes to the grief of that. I was thinking in the mind frame of Emmett Till's mother, when they killed her son, and she exposed that to the world. People were commenting on the picture, how much you grieve them and how much it hurts them, and though I don't want to intentionally hurt anyone, uncomfortably causes change and growth is uncomfortable, and so I'm happy that it causes uncomfortable emotions for people, because if you do something that causes you to be uncomfortable, you either change it and grow above it or you'll stop doing it.

Hopefully those uncomfortable emotions will strike some people to either say something, because we've grown up into a culture and we perpetuate a culture now where it's not my business, I'm not going to say anything, it doesn't involve me, it doesn't affect me, I'm not going to say anything. It may not affect you directly, but this affects all of us indirectly because, if we don't learn from history, it's bound to repeat itself and if we don't start breaking these generational things, as I stated, 15 years from now, my children are going to be protesting, asking for the same equality that we're asking for now.

And I see it as a police issue. Yes. Race is the fire that got this water hot, but this is a police issue and this is the issue of us holding each other accountable, the police want us to do their job when they come into our neighborhoods and ask us, what did we see and what happened?

But they need to hold each other accountable as well. And it's just a matter of saying something. I witnessed a gentleman, they had looted a Dollar General downtown, and the police officers, I was recording it, the police officers took him to the side of the building. They were kind of rough with him and then you saw another police officer push him off of him. It's those little acts of accountability that will cause a ripple effect. If we shed a light on this, on excessive force and abuse of power, then there won't be anywhere for this injustice to hide. We throw shade over it, we look the other way, we don't say nothing, we don't want to be involved, we don't want to be uncomfortable, but somebody has to.

We've been getting threats. People have called my phone. They say derogatory things. I got a 740 number call my phone at least twice a day and just yell the "N" word to me. But prayer is a big thing in my family and like I said, someone has to be willing to be uncomfortable and I know that they're trying to portray it as, I'm not being a good mom and I'm putting my kids in harm’s way, but faith is big and my family, and I'm definitely taking the necessary precautions to make sure that my children try to stay as safe as possible, but something has to be done. Something. Something has to be done.

I'm hoping that it will catch fire. I'm hoping that the younger generations, it will catch fire with them. I'm hoping that we'll read more, we'll worship on our laws more, and know where we stand. They knew back then that if we educated ourselves, that we would be a force to be reckoned with. So they purposely put a liquor store on every corner to make sure that we didn't achieve that. Well, we're done getting drunk and we're woke now and I'm ready. I'm ready to start it for sure.

Adapted from an interview.