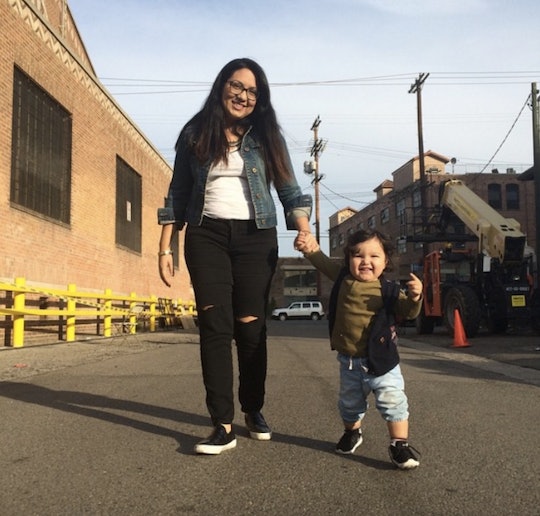 What If I Can’t Afford College For My Child? The Tuition Fear Is Real, & My Son's Only A Toddler

I started looking into college savings plans while my son was still in utero. When you’re supposed to be reading about baby’s first weeks and postpartum care, I was researching stocks and bonds and financing options. Long before the stork ever did, a giant package asking me to pick a plan and stock options arrived at my door. I put the packet aside and moved on to picking a stroller. Figuring out if I wanted a red or black umbrella carriage seemed much more fun at the time. I’d pick up stressing over tuition and room and board after I had delivered a healthy human.

Thinking and worrying about the future has always been a blessing and a curse for me. I went to a state college and stayed close to home because I didn’t want a future saddled with student loan debt. My mother always lamented not having a savings plan to help pay for my studies. Because I am in a more privileged financial position than she was, I’d like to prepare for my son’s college as much as possible. I want him to know a college education is the expectation and not simply an option. But I constantly worry about the uncertainty of a future that is so often beyond my control. When you look at Latino college attainment scores, you notice while many attempt college, only about nine percent actually graduate. So I want to ensure my son the best possible chance at beating the odds already stacked against him. I look at the rising cost of college and wonder how we’ll ever be able to afford to help him. He hasn’t even set a foot in a classroom yet, and already I’m stumped by the question: How will we ever afford college?

I know that college isn’t the only way to a good life. However, it was a game changer for me. I was the first in my family to graduate, and getting a degree opened many doors. It gave me options and a career. It gave me confidence. Naturally, I want to ensure my son had access to those same opportunities. But right now, Millennials are drowning in student debt, starting their lives on such a huge deficit that prevents them from attaining their personal and professional goals. The thought of our son having to deal with that is, on its own, enough to scare any parent into planning 18 years too early.

We found that the most popular way to save is through a 529 plan, a tax-free, savings account that accumulates interest on a family’s behalf. When your child reaches college age, you can withdraw money saved through a 529 plan without incurring taxes or penalties. It seemed like a viable open for us. You don’t have to pick the plan offered by your home state, you can do it online in about 20 minutes. We chose the Utah Educational Savings Plan because of its high ratings, and because it automatically deducts a predetermined monthly amount from our bank account. It’s all the leg work with a little peace of mind. A 529 offers my son flexibility. If he chooses not to go to college or to attend a non-accredited institution, he still has the freedom to decide his future.

As parents, we felt prepared. So now when the time comes, our son will be too.

Then came the scary news. The projected cost of a bachelor’s degree when our son is of age will be a whopping $198,000 for four years of instruction, including room and board. This assumes that college costs will continue to rise at about four percent per year, and also assumes our son will attend a college that costs approximately $25,000 in 2015. Attending the most inexpensive state schools in California, where we live, is currently ~$23,000, and that includes tuition, books, room and board, and transportation. Our current monthly donation will not cover 100 percent of the projected cost for college in 2031. As a parent, you can’t imagine how sh*tty that feels.

There are ways to minimize the costs of attending college. Our son can choose to live at home to cut living expenses. He can attend a local state school, like I did, to reduce further costs. Better yet, he might be a star athlete or top scholar and might get a scholarship somewhere. All of these factors exist outside the realm of my control, though. Maybe my son will not be President of the Debate Team. Maybe he’ll want to go to school across the country, like I sometimes wish I had. Because his father is an artist who admits he had a hard time adjusting to the rigor of academic life, maybe our son will choose to pursue a life in the creative industry.

The what-ifs make it impossible to plan for any cost relief that lies ahead, but I can plan on raising a financially savvy child who at least understands the monetary burden college poses. I can raise him to understand the consequences of not attending college, too. As much as I want to protect him from the realities and encourage him to be whatever and whomever he likes, and to go wherever he likes, we all need to wake up and smell the college coffee, bitter and tar-like as it may be.

College changed my life, and I feel so fortunate that I was educated during a time when state schools were still affordable. My fears for my son are not unlike any other parent’s. We are headed towards a future where even if students are prepared for college, they won’t be able to attend because their parents couldn’t afford it. It won’t matter how many pennies we’ve pinched and how many savings accounts we’ve opened. The cost of tuition has gone up so rapidly that the system seems unsustainable. The New York Times recently noted that, “if over the past three decades car prices had gone up as fast as tuition, the average new car would cost more than $80,000.”

With an election looming, I’ll be paying closer attention to what candidates say about college affordability. Democratic hopeful Bernie Sanders wants to eliminate tuition at all four-year public universities, while Hillary Clinton has proposed a plan that would make it less expensive for students attending state schools and would adjust the expected contribution of parents based on their income. The Republican playing field has launched an interesting rhetoric on the topic. Carly Fiorina recently touted that for-profit colleges educate students at a lower cost and that President Obama is mistaken for attempting to regulate them. Jeb Bush blamed students, saying it’s taking too long to graduate. Overall, Republicans seem too busy defunding Planned Parenthood and insulting their opponents. I know they don't care about my son. I know they don't care about our finances.

Partisanship aside, we haven’t created a sustainable system. Instead, we’ve made it possible for our children to sacrifice more than they understand in order to graduate with a degree in a workforce that’s not altogether ready for them. We need a massive overhaul of how we think about college, how we plan ahead to pay for college, and we need our government to take action on the rising costs. If college is the great equalizer, then we need to level the playing field. I want to know my son at least stands a chance.