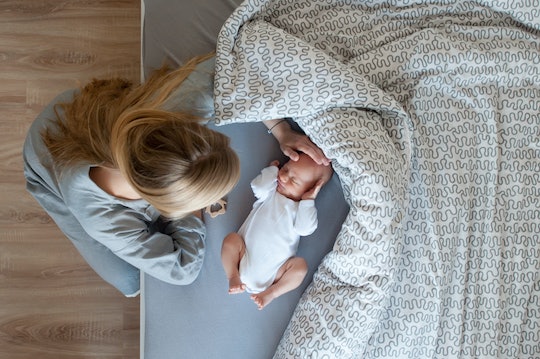 Changed Your Mind About Returning To Work Post-Birth? Here Are Your Options

Having a baby changes everything. Trust me, it's not hyperbole. And those changes aren't easy to navigate when you're a working mom in the United States, where mandatory paid parental leave is nothing more than a pipe dream. So many of us don't have the ability to take the time we need to recover from childbirth and bond with our babies. So, really, it's no surprise that so many of us go back to work, and far earlier than we should. But what happens if you change your mind about coming back from maternity leave? What are your options, as a new mother, when you're facing yet another big, potentially life-altering change?

The good news? Changing your mind probably won't be as terrifying as you might imagine. It's perfectly legal to change course. However, you should definitely learn what your rights are before you decide, and try to leave your position on as good of terms as you can. According to LinkedIn.com, you don't have to return from maternity leave unless you have a signed work agreement with your employer. But depending on your state and your company policies, you might be on the hook for repaying your employer for the cost of health insurance premiums.

As Beverly Veal, executive director of human resources at the University of Chicago, tells FastCompany.com, it's important to know your rights as an employee, as well as familiarizing yourself with your company's policies. Suzanne Lucas advises new moms to think twice about whether or not to resign while on maternity leave, as you might risk burning a bridge that's important for the future. But in the end, and always, it's totally up to you to decide what's right for your career and your family, and you absolutely shouldn't feel guilty about whatever decision you ultimately come to.

According to LinkedIn.com, unless you have a signed contract, you don't have a legal obligation to return to your job after maternity leave. But you should definitely consider the financial cost of not returning, before you make your ultimate decision. If you don't go back you might actually have to repay the portion of your health insurance premiums that were paid by your employer while you were on leave. So it's not just the amount of money that will no longer be coming in; it's the potential amount that might be going out, if you end up leaving.

Fastcompany.com advises new moms to consider both their company's human resources policies and their relationship with their employer. You should let your employer know as soon as you decide not to return to work, so they have time to find a replacement, and consider resigning in person or over the phone rather than quitting via email. According to the same website, to smooth things over or maintain your relationship with your former employer, you might offer to help them during this time of transition, or work until a replacement can be hired.

While it might be better for your employer for you to give ample notice, according to Parenting, it might not be a great idea for you, especially if you receive employer-sponsored benefits like paid leave or health insurance. If you do decide not to return to work after maternity leave, your employer might end those benefits immediately. While Federal law requires that they continue your health insurance coverage, you may be required to pay high premiums in order to keep it. On the other hand, if you wait and resign after you return, you might hurt your relationship with your employer.

According to Suzanne Lucas, "The Evil HR Lady," while it's absolutely your decision to resign after returning to work from maternity leave, or to change your mind during your leave and not come back to work at all, it's likely to annoy your boss. In a 2014 interview, Lucas told CBS News that had you told your employer, in advance of going out on leave, that you weren't interested in maintaining your position after giving birth, they would have had more time to find and hire a replacement. Still, if you change your mind about coming back, or are unable to return, it's totally within your rights. Whether or not it's "in bad form" is, in the end, irrelevant.

According to The Muse, you should remember that you won't be the first person to quit a job, and you definitely won't be the last. Resigning from positions is something everyone does at some point during their career. It's not personal, but it is important to do so with grace and respect, so you can avoid bad feelings or a negative employment reference in the future.

In the end, only you can decide which risks to take, and you should do so without feeling an ounce of guilt and with all the information necessary to make the best decision for your family and your career.