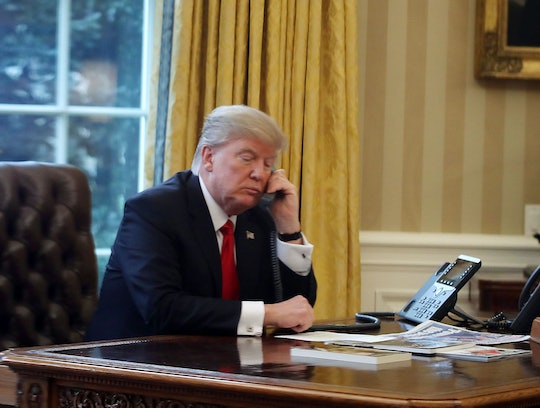 On Monday, The Washington Post reported that President Donald Trump allegedly shared "highly classified" intelligence information when he met with Russian Foreign Minister Sergei Lavrov and Ambassador Sergey Kislyak in the Oval Office last Wednesday. What information did Trump allegedly disclose to the Russians? According to Trump administration officials familiar with the situation, they allege the president disclosed highly classified intelligence regarding a significant terrorist plot, as well as its specific location in relation to the Islamic State.

UPDATE: Romper's requests for comment from the NSA and the CIA were not immediately returned, though National Security Adviser H.R. McMaster said in a televised statement to the press on Monday,

EARLIER: One U.S. official told The Washington Post that President Trump allegedly revealed "code-word information," a moniker for some of the highest levels of classified intelligence; The source went on to say that the information Trump allegedly shared hadn't even been shared with some of the United States' closest allies. An unnamed U.S. official confirmed The Washington Post's report to BuzzFeed Monday evening, saying Trump's alleged intel sharing with the Russians is "far worse than what has already been reported."

Trump met with the two Russian officials and their aides just a day after abruptly firing FBI Director James Comey. In an interview the NBC News on Thursday, Trump insisted he didn't fire Comey because of the FBI's investigation into Russian interference with the 2016 election.

Speaking to The Post, National Security Adviser H.R. McMaster denied Trump shared any highly classified information with Lavrov and Kislyak. "The president and the foreign minister reviewed common threats from terrorist organizations to include threats to aviation," McMaster said. "At no time were any intelligence sources or methods discussed and no military operations were disclosed that were not already known publicly.”

But McMaster's comments stand in stark contrast to the rest of the report. When Trump met with Russian officials in the Oval Office, no U.S. media was allowed in the room — only Russian journalists were permitted to cover the meeting. Perhaps the most troubling part from The Washington Post report is that Trump allegedly offered the information as a way of showing off to Lavrov and Kislyak:

Backlash has been swift on social media, even as members of Congress have expressed their shock and outrage. Ranking Democrat on the Senate Intelligence Committee Sen. Mark Warner called Trump's actions "inexcusable" and "a slap in the face to the intel community" if The Washington Post report is true.

It remains to be seen how these latest allegations about Trump's disclosure of classified intelligence to Russian officials will factor into both the Senate and House Intelligence Committees' investigations of the Trump campaign.