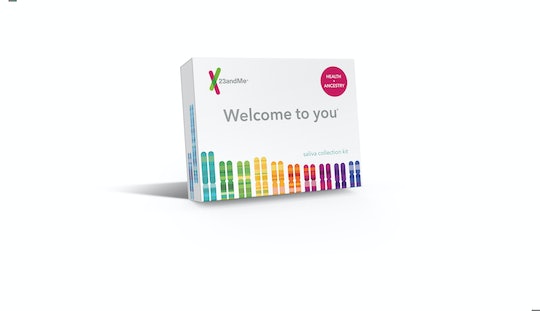 What Is 23andMe, & How Could It Help Families?

Last week, the FDA approved a popular consumer genetic testing service for a first-ever kind of at-home testing. The company, which has actually been around for years, had previously been told by the FDA it could not sell kits directly to consumers that would test for genetic diseases and conditions. Now, that decision has been reversed, and it's the first time ever consumers can purchase an FDA-approved genetic testing kit to assess their risk for various diseases and conditions. What is 23andMe and how could it help families? It's a surprisingly easy and affordable DNA testing service.

23andMe was founded in 2006 by Linda Avey, Paul Cusenza, and Anne Wojcicki — the former wife of Google's co-founder, Sergey Brin. It was meant to be a genetic testing service that would allow consumers to easily and affordably access information about their health, based on DNA testing. The name comes from the fact that there are 23 base pairs of chromosomes that make up our DNA, and within them can exist a multitude of mutations that might make us more or less likely to have certain traits or develop certain health conditions. DNA can determine everything from whether a person has wet or dry earwax to whether they carry genetic mutations for diseases like cystic fibrosis, which they could pass on to a child.

The kits, which are about $200, are mailed directly to a consumer's home and include everything they need to provide a sample of their spit. The saliva is secured in a test tube, which is then mailed back to 23andMe and put through the company's lab. In 6-8 weeks, the consumer gets a report that includes not just their genetic risk for disease or health conditions, but information like whether their genetics make them more likely to enjoy bitter flavors, have "asparagus pee," have a higher caffeine metabolism, or have a cleft chin.

The FDA has now approved 23andMe's testing service to provide reports to consumers about their genetic risk for the following 10 diseases and conditions:

23andMe examines a person's genetic material and assesses risk based on genetic variations called single nucleotide polymorphisms (SNPs). When a cell is getting ready to divide, it makes a copy of its DNA for the new cell. That copy job doesn't always go exactly as planned, and the errors result in SNPs. While that probably sounds like a bad thing, everyone has SNPs in their DNA, and it's actually quite normal, according to the National Institutes of Health.

When someone has their DNA tested through a service like 23andMe, the contents of the report they get might be hard to interpret. First of all, genetics are only one factor in whether someone will develop a condition or disease. For most diseases or health conditions, environment, lifestyle, and other factors have to be taken into consideration along with genetic information. 23andMe reports can only tell you what your genetic risk is, but it can't tell you whether you will definitely get a disease or a health condition. It also doesn't test for every SNP that is known to be associated with a certain disease or condition — so, just because a person has one or even some of them, it doesn't mean they have all of them.

That being said, there are some heritable diseases or conditions that genetic testing can be very helpful in detecting. 23andMe tests for several SNPs that are known to cause a disease called hemochromatosis, which can be very serious because it causes a person's blood to have too much iron. This can be particularly dangerous in newborns. Hemochromatosis is recessive, which means that in order for a person to inherit the condition, both of their parents must have a mutated gene to pass down to them. So, if a couple used 23andMe's testing service and found out that they are both carriers, they could tell their doctor if they decided they wanted to have a baby. Their doctor, in turn, could order additional tests to get a better idea of their child's risk for the condition, and if they seemed likely to inherit it, precautions could be taken throughout the pregnancy and birth.

Since the company started, there's been a lot of debate about how reliable consumer genetic testing really is. If consumers don't understand exactly what the tests look for, how they work, and the limitations of the information in the reports, it could lead to a lot of misinformation and perhaps even panic. On the other hand, the kits also have the potential to be a learning tool for families, not just about their ancestry (which 23andMe also tests for) and genetic data, but to bring science into their family's life in a truly personal way. Teaching kids about how genetics work, the importance of healthy lifestyle choices, and how our DNA interacts with the world around us can now be done in a way that's totally personalized.

$200 per kit might be a steep cost for a family science experiment, but as the science of genetic sequencing and genotyping becomes more refined, companies like 23andMe could become a lot more commonplace. The potential for them to become more useful for consumers, and to contribute to the personalized medicine revolution, will depend largely on the FDA's continued approval. As 23andMe was shutdown by the FDA before, families who are interested in trying the service out might want to get it while the getting's good: genomics and medicine are two of the most rapidly evolving fields, and 23andMe is situated in the crux of both.