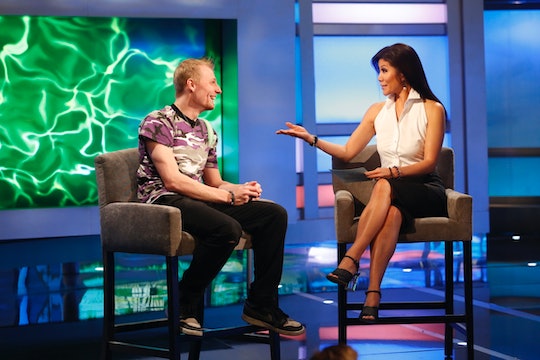 After Scottie was evicted from the Big Brother house on Thursday, host Julie Chen revealed news that has fans excited for the next live eviction. As many fans predicted there will be a "Jury Battle Back," once a fourth person is sent to jury. But if this is your first time watching the popular reality competition you may be wondering what is a Battle Back on Big Brother? It is exactly what it sounds like.

Once a fourth person is sent to jury on Thursday that person along with the three existing jurors — Rockstar, Bayleigh, and Scottie — will compete to return to the house and continue competing to win the $500,000 grand prize. Most fans suspected a Battle Back once Kaitlyn failed the competition that would have allowed her to return to the game. Since Big Brother's schedule is planned out in advance and a double eviction night is expected, fans knew there had to be a way for a houseguest to return to the house so there would be an extra week of game play.

Since those who were evicted pre-jury were sent home and viewers have yet to see the jury house, suspicions about there being a jury battle back were high, and the fans were right. The last time there was a Jury Battle Back was during Season 18. For that Jury Battle Back, the five jurors along with the four remaining houseguests participated in an endurance comp for head-of-household, and for the jurors, a chance to return to the game. Many fans believe it'll be a similar kind of set up for this season's jury battle back.

While a Battle Back is always fun it may not actually be beneficial to whoever wins it. Right now it is pretty much guaranteed it will be a Battle Back between members of The Hive since Fessy and Haleigh are currently on the block. If Fessy is evicted, which seems to be the plan, that means either he, Scottie, Rockstar, or Bayleigh will return to the game and they will be the number one target back in the house with only one ally.

That said, back in Season 18, Victor Arroyo won the Battle Back competition (the only Big Brother player to return to the game twice in one season) and was able to stay in the house for two more weeks before coming in fifth place. Still, Victor was a comp beast and was often able to save himself. The same cannot really be said for the competitors in this Jury Battle Back. Scottie and Fessy, if he is evicted, have the best shots of winning their way back into the house, but the only way they will stay safe is if they also win HOH. And even then, fans saw what Fessy did with his last HOH win so that still may not be helpful.

The best person to win the Battle Back would definitely be Scottie. Since Fessy betrayed him Scottie could easily distance himself from Fessy or Haleigh, whoever remains in the house this week, and keep the target on them instead of himself. That would give him another week to hopefully win HOH and then take a shot at the major players in the house, Level 6. Alternatively, many are hopeful Bayleigh will get back into the house and that her power app can still be used since it was never used before she was evicted.