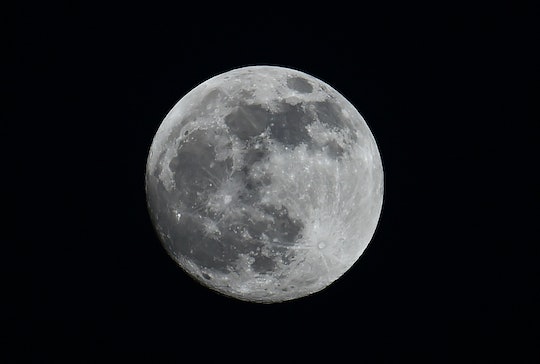 What Is A Black Moon & Where Can You See It This Weekend?

If you were a fan of the super moon or the blood moon, then you've probably heard about the upcoming black moon. There's going to be a new lunar phenomenon this Friday night — but don't get your telescopes out just yet. A black moon is the second new moon of the month, according to The Los Angeles Times. And like all new moons, you won't be able to see the black moon.

A black moon is, unfortunately, hard to spot in a dark night sky. The reason it is referred to as a black moon is because the side of the moon that is lit by the sun will be facing away from the Earth. This celestial occurrence happens when there are two new moons in the same calendar month; The last new moon was on Sept. 1 and the black moon will rise on the last day of the month.

A black does not differ from regular new moons, and unfortunately for those looking to see some sort of spectacular, once in a lifetime event, it isn't totally uncommon to have two new moons in one month. Still, while a black moon definitely sounds a bit cooler than it actually it is, it's still pretty rare. According to Space.com, black moons only occur approximately every 32 months.

The term "black moon" certainly sounds interesting, of course, but it's not actually a scientific term at all. Monikers for events in the lunar cycle, such as "blue moon" and "black moon" were not actually created by astronomers. Social media has played a huge role in how events like the black moon this Friday become so widely known. The only time astronomers will really be found using these pop culture terms is when they're discussing how tracking the moon's phases became so popular on Twitter.

There are some people, though, who believe this particular black moon has serious significance. Conspiracy theorists believe that the black moon on Friday signifies that the end of the world is near. They have pointed to two Bible passages, Matthew 24:29 and Luke 21:25-26, that predict the apocalypse will be foretold by the stars. But don't freak out just yet: Scientists are positive everything on Earth will still be running smoothly on Saturday morning.

Derrick Pitts, chief astronomer at Philadelphia’s Franklin Institute, told The New York Post that there is nothing to fear about a "a black moon rising," and that the term is simply a "great way to stir up scary images, bad omens, all sorts of stuff like that."

"It's a great way to generate some fear, too," he said. So don't go out and buy all the canned food from your grocery store just yet. The moon is just going to take a night off from lighting up Earth's surface. And if you realize that you forgot to look up at the black moon while your eating your bagel and sipping on a hot coffee on Saturday morning, don't worry about it too much: You'll be able to see another moon-less sky in July 2019, totally apocalypse-free.