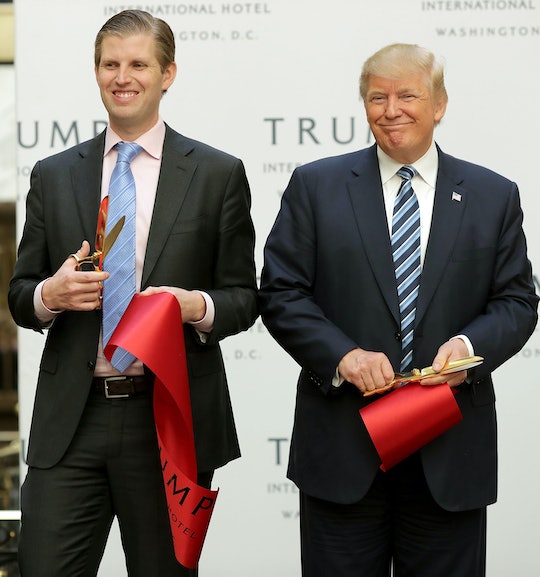 What Is A Blind Trust, & Why Isn't Trump Using One?

For many Americans, the days and weeks following election night have been mired by all manner of troubling questions. Some are worried about their children and families. Some are wondering whether they'll get to keep their health insurance. And others still are bogged down by more technical questions, the sort of legalistic minutiae brought on by Donald Trump, a president-elect who appears to be evading so very many laws and precedents. For example: What is a blind trust, and why isn't Trump using one?

According to Leslie Kiernan, an attorney who served as Deputy White House Counsel under President Obama, a politician sets up a blind trust to prevent conflicts of interest between one's businesses and assets and one's duties in government. "You typically cannot simply transfer existing assets into a blind trust," Kiernan told Forbes. The assets would first need to be liquidated, and from there transferred to a trust that would be "managed by an independent trustee approved by the Office of Government Ethics." Under this arrangement, according to Kiernan, the trust's owner would "not receive any information on what has been bought or sold with his money."

During his campaign, Trump and his spokespeople assured the public, repeatedly, that his assets would be placed into a blind trust. Even at that time, there were serious red flags, because the so-called "blind trust" was to be overseen by his three adult children, 38-year-old Donald Jr., 35-year-old Ivanka, and 32-year-old Eric. During an ABC News interview in September, Donald Jr. insisted that he and his siblings would oversee a "blind trust," despite interviewer George Stephanopoulos repeatedly pointing out that a trust, by definition, is not "blind" if run by one's own children.

Since Trump's election, the previous concerns about Trump's "blind trust" have been fully borne out. The Trump Organization will still reportedly be turned over to Trump's children, and now it seems clear that his children, in turn, will be involved in government. All three children, in addition to Jared Kushner, Trump's son-in-law, were named to the White House transition team's executive committee.

It doesn't end there. Last week, Ivanka Trump joined her father during his meeting with Japanese Prime Minister Shinzo Abe, and according to recent reports at The Hill, Ivanka was also present during her father's first telephone meeting with Argentine President Mauricio Macri. At this point, we're miles away from a blind trust. Indeed, it appears that the Trump's previous assertions that his children would control a blind trust — problematic in itself — will be slowly supplanted by a new, oligarchic reality in which Trump himself continues to be directly involved with his business interests.

Just one week after being elected, Trump met with various Indian business partners at Trump Tower in New York. Trump's three children were present. While it's not known what was discussed during the meeting, it is know that The Trump Organization has "at least 16 partnerships or corporations in India," according to an analysis performed this week at The Washington Post. Sagar Chordia, one of the Indian real estate developers who attended the meeting, confirmed with The New York Times that the meeting had "included discussions with the Trump family about possible additional real estate deals." The Times article specified the types of conflicts of interest that will soon be in play, noting,

In just under nine weeks, Mr. Trump will take control of a portfolio of public business between the United States and India, the world’s two largest democracies, supervising debates over issues including climate change, maritime shadowboxing with China and the nuclear standoff with Pakistan. The meeting shows that Mr. Trump has not fully disengaged from his business ventures even as he leads his presidential transition, and it highlights the potential conflicts he will face going forward if he does not separate himself from a brand that has been constructed around his persona.

While the press reported on this meeting both here in the United States and in India, Trump's transition team has declined to speak about it. Robert S. Stern, an attorney who formerly worked with the Center for Governmental Studies, told The Times that "It already looks like [Trump] is using his position as president-elect to promote something in India that would benefit him financially. It is not presidential — or at least presidential before him."

The way things are going, the American public will need to change its definition of both "presidential" and "blind trust."