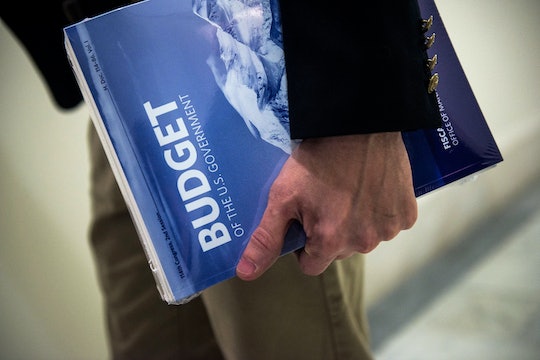 What Is A CBO Score, & Why Is It So Important?

Whenever a new piece of legislation is up before Congress, there's a dedicated team of nonpartisan individuals at the Congressional Budget Office (CBO) who provide an analysis of how much that legislation will cost, in terms of the federal budget. As of late, one major piece of legislation under consideration that people have been waiting for the CBO to weigh in on is President Trump's proposed replacement for the Affordable Care Act, the American Health Care Act. On Thursday, the House of Representatives is expected to vote on the revised proposal of the ACHA – in the absence of an updated score from the CBO. What is a CBO score? And why are Republicans passing Trumpcare without it?

The CBO uses its collective economic expertise to asses proposed legislation and provide cost estimates within the broader context of the federal government's budget, according to the CBO's official website. Basically, what that means is that the CBO projects how much the government would spend if that legislation was put into law, but it doesn't just mean the federal government: it also encompasses the potential burden on state governments and several groups in the private sector, too. Money talks, and the point of explaining the financial impact a piece of legislation could have would, ideally, help those voting on it decide if whatever is being proposed is — quite literally — worth the money.

The politicians who are voting on these pieces of legislation are not, by definition, economists themselves. Individually they may have some notion of the economic consequences of a particular bill, but collectively they likely do not. That's where the CBO comes in. Since the CBO is strictly nonpartisan, it provides an assessment independent of any political affiliation. The "score" the CBO gives to a particular piece of proposed legislation is intended to help members of Congress understand the potential fiscal ramifications — both at the macro and micro level — should they pass such a bill into law.

The most recent analysis from the CBO regarding the American Health Care Act, or the ACHA, was back in March. That's when the original proposal was shot down and sent back for revisions. It was in that report that the CBO estimated that under the ACHA, more than 15 million Americans will lose their insurance in the next decade — whether they get it through the exchange, their job, or Medicaid. This made it seem like no one would be safe from potentially losing coverage. Oh, except for those voting on it: the AHCA still has an exemption preventing members of Congress and their families from losing coverage and the benefits provided by Obamacare.

The most glaring problems with the original AHCA was that it appeared to work in favor of the wealthy and healthy, while the consequences disproportionately affected some of the sickest, poorest, and oldest Americans, according to The Atlantic — arguably the people most in need of coverage. While the plan had attempted a fix in the form of incrementally increasing, age-adjusted tax credits, those credits were considerably less than what people who currently have insurance through the ACA were getting. The implication being that, under the AHCA, these people would be left to shoulder more, not less, of their annual healthcare expenses, according to the New York Times.

The most recent version, which is up for a vote as of Thursday, has evolved from the previous version the CBO weighed in on. It would make sense that the CBO review and analyze the new version before the vote, but that hasn't happened, as The Washington Post reported. Now, the GOP wants the vote to go ahead in the absence of the CBO's analysis. Many have pointed out that, when the bill lost support last time, it was at least in part because of the CBO's analysis — and Republicans may fear a similar situation this time around if the CBO's report were to reveal similar findings, according to the Post.

As President Trump's 100th day in office came and went and the promised repeal of Obamacare had not come to pass, Republicans have been eager to get the ACHA off the ground. This is probably another reason why they're hoping to go ahead minus the CBO's analysis; to have to start all over again a third time would push back other things the administration hopes to do. Moving so hastily through an issue as important to the American people as health care, however, is not a wise move. That's not an editorial opinion, but rather, one that's shared widely by key stakeholders in health care, pharmaceuticals, and hospital administration, according to NPR. Not to mention legions of patients whose lives depend on access to coverage.

While a CBO score isn't necessarily mandatory prior to the vote, if the ACHA passes and the CBO's score comes out after (which, it will eventually) it could be a major source of embarrassment for the GOP. If the legislation is passed with such little support, and with such potentially grave consequences, it could certainly stand to undermine future legislation and further erode confidence in the administration. Or, it won't — but millions of Americans will lose their coverage.