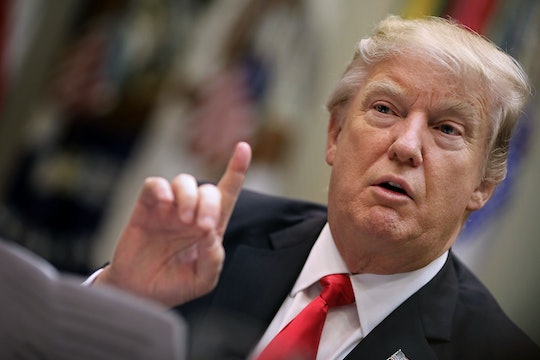 What Exactly Is A Cloture Vote & How Does It Work?

After dropping hints that he’s made an important decision regarding a key nomination during his first week in office, President Donald Trump announced this week that he will reveal his choice for the vacant seat on the Supreme Court Tuesday night at 8 p.m. Eastern Time. The president’s nominee, however, isn't the be-all, end-all. Under the Constitution, Trump needs the majority of the Senate to get on board, and sometimes this doesn’t exactly work out in the president’s favor. It’s already expected that Senate Democrats won't let it happen easily, no matter who Trump’s pick may be — and if that happens, then a “cloture vote” would be necessary to bring any stonewalling to an end. But what is a cloture vote and how does it work in the confirmation process?

In basic terms, a cloture vote is a way for the Senate to end debate on a particular subject through the use of a two-thirds vote. This is how it works: After Trump’s nomination makes it through the Senate Judiciary Committee, it will go to a full Senate debate led by chair of the committee. After all 100 senators — comprised of 54 Republicans and 46 Democrats — debate the nomination, then the nomination goes to a vote. But, if even just one senator objects and decides to stall the debate by invoking a filibuster, then a supermajority (more than a simple majority, or over 50 percent of the Senate) would be needed for Trump’s nomination to make it through. That’s where a cloture vote comes into play.

According to The Washington Post, it takes 60 votes to stop a filibuster (or invoke a cloture vote) and this would mean that Democrats would need the help of 14 Republicans to object to Trump’s nomination for their efforts to be successful. If it goes the other way and the Republican-led Senate gets the supermajority, or 60 votes, then Trump’s pick would be confirmed.

And this is a very possible scenario. According to Politico, Senate Democrats are already prepared to filibuster Trump’s SCOTUS pick no matter who he chooses to fill the current vacancy. “This is a stolen seat. This is the first time a Senate majority has stolen a seat,” Sen. Jeff Merkley of Oregon said in an interview on Monday with Politico. “We will use every lever in our power to stop this.”

Merkley added in the same Politico interview that he “will definitely object to a simple majority,” meaning that Trump’s nomination will most likely need 60 votes, rather than 51, to be confirmed by the Senate.

The vacant seat on the Supreme Court was previously filled by the late Justice Antonin Scalia, who died last February and served for nearly 30 years. After Scalia's death, President Barack Obama nominated Merrick Garland, whose nomination was prevented by the Republican majority.

While Trump's SCOTUS nomination turns and the ultimate outcome the confirmation process are still up in the air, it's very clear that we're in the midst of a very tense political climate.