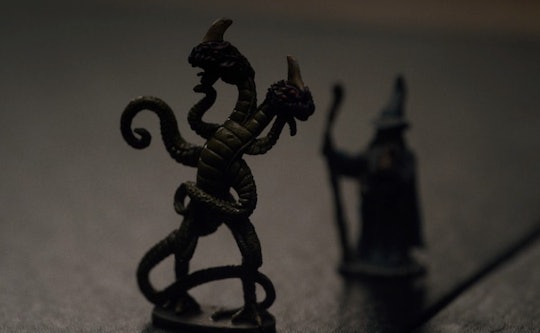 What Is A Demogorgon? 'Stranger Things' Borrows From 'Dungeons & Dragons' & Beyond

(Warning: This post contains spoilers through Episode 8 of Stranger Things.) Stranger Things may be a brilliant homage to Spielbergian '80s nostalgia and a Twin Peaks-esque examination of small-town horror, but it's also legitimately downright scary. The centerpiece of the season premiere features a terrifying, largely unseen creature stalking a young boy named Will Byers as he rides home from his friend's house after a rousing, hours-long Dungeons & Dragons campaign. The mysterious beast follows Will to his empty house, opening locks and morphing through walls like it's a breeze, eventually confronting Will, who then vanishes into thin air along with the monster. Later in the season, as his friends and mother search for Will, we finally get a name for the beast – the Demogorgon. But what is a demogorgon, anyway?

The Demogorgon is a creature that appears in the Dungeons & Dragons game that Will and his friends play very frequently. According to D&D literature, the Demogorgon, a powerful demon prince, is "one of the most terrifying of monsters [and] is also one of the best-known demon lords in the D&D game." Beyond D&D, the beast allegedly has its origins in the commentary on a Latin poem named Thebaid, attributed to a fourth-century Christian scholar named Lactantius Placidus.

In a cheeky little bit of foreshadowing, during the campaign the kids are playing in the very first episode of the season, Mike, who serves as the Dungeon Master, announces that the group is ambushed by a two-headed Demogorgon. Will rolls the dice to see if his move to cast a protection spell worked, when they're interrupted by Mike's mom, who tells them to pack it up. As he's leaving, Will confesses to Mike that his roll was unsuccessful – the protection spell failed. Shortly thereafter, Will is abducted by the actual, corporeal creature that his friends later call the Demogorgon as well. Clever, huh?

Of course, within the context of the series, we don't actually know what the creature really is. The kids decide to call it a Demogorgon because, in Episode 2, their supernaturally-inclined new pal Eleven (who is able to commune with Will where he is trapped in "The Upside Down") uses Will's D&D wizard figurine as well as the Demogorgon figurine to demonstrate that Will is hiding from the beast. It's not actually a Demogorgon – the faceless creature doesn't look much like the D&D Demogorgon at all.

The uncertainty of what the inter-dimensional beast really is creates an extra layer of fear. How can you fight a monster when you don't know what it truly is and what it can do? Towards the end of the season, Mike's sister Nancy and Will's brother Jonathan team up to lure the Demogorgon to them, theorizing that it's a predator attracted to blood, like a shark.

Obviously, this is a hugely risky move, given that (1) they're just guessing, and (2) they don't actually know the monster's powers and weaknesses. The monster is eventually defeated in Episode 8 by telekinetic Eleven (though the act of defeating the creature appears to destroy Eleven in the process). Luckily for the kids, they have a super-powered child on their team and they prevail in the end.