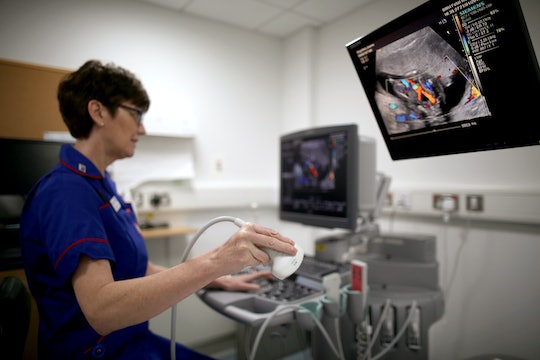 Pregnancy can be stressful, there's no doubt about it, and if you're experiencing it for the first time it can be particularly worrisome. That's especially true if, prior to carrying a pregnancy to term or close-to-term, you've experienced a miscarriage or pregnancy loss. And if your OB-GYN uses a term you aren't familiar with, you are bound to have questions. For example, what is a dynamic cervix and, perhaps more importantly, what does it mean for you and your pregnancy if your doctor tells you that you have one?

To find out more about this condition and what it is, Romper spoke with Dr. Angela Jones, MD, a board certified OB-GYN and ASTROGLIDE’s Resident Health Advisor, and Kathy Fray, a senior Midwife and author of Oh Baby! Birth, Babies & Motherhood Uncensored, via email. According to Jones, "dynamic cervix" isn't actually a medical term at all, but, rather, can sometimes refer to cervical shortening seen during an ultrasound. This can be a sign of a problem in people with risk factors, but sometimes it isn't a big deal at all, which is why it's important to consult with your OB-GYN about your particular case.

Fray adds that sometimes medical providers use the phrase dynamic cervix in place of cervical incompetency, because "it's less offensive to women — they didn't like being told any part of their body is 'incompetent,' which is fair enough." Because these two conditions are different, though, it's important to get a straight answer from your OB-GYN or midwife about what exactly is going on with your cervix, and then proceed from there.

"During pregnancy, the whole job of the uterus's cervix (neck of the womb) is to stay firmly tightly closed to grow the baby over the nine months," Fray continues. "Some women's cervix can be unusually short (particularly if they have had procedure after an abnormal Pap smear." This can impact a person's ability to carry their baby to term.

"Cervical shortening can be diagnosed on routine ultrasound," Jones says. "People with risk factors for cervical shortening or who may be at in increased risk for cervical incompetence due to previous history, procedures on their cervix, or a history of preterm labor may get serial cervical length evaluations staring around 16 weeks as a precautionary measure."

If you end up receiving this diagnosis, Jones explains that there is not a one-size-fits-all treatment plan for cervical shortening, and your doctor will evaluate the situation and make recommendations for treatment or simply monitoring the situation. "It may mean they are at an increased risk of a preterm delivery," she says. "It may necessitate the need for intervention such as a cerclage, depending on when it was/is diagnosed and how significant it is. It may mean the woman receives interventions such as steroids for fetal lung maturity, or," she adds, "it could mean nothing at all."

For Maureen Grace, an Omaha mother of two, having a dynamic cervix meant undergoing a procedure called a cerclage when she was 18 weeks pregnant with her daughter. The Mayo Clinic explains that a cervical cerclage is sutures or tape placed in the cervix to reinforce it during pregnancy and prevent pre-term labor. "I was high risk because I delivered my son early, so they did an ultrasound specifically to look for it," Grace tells Romper via email. "They told me that I will have one placed for all subsequent pregnancies just to be sure."

For Grace the procedure was not a big deal, as they numbed her cervix beforehand. "They described it as a purse string stitch that would keep my cervix closed, and help make sure I didn’t go into preterm labor," she says. "Anything to get a full term baby was worth it."