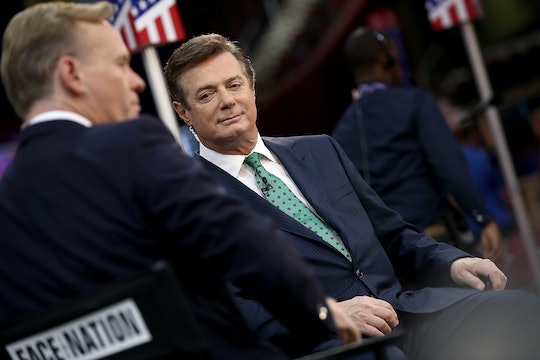 What Exactly Is A Foreign Agent?

In the past few weeks, lobbyist Paul Manafort's name has been the gleaming centerpiece in any conversation about President Trump's ties to Russia — and thanks to an announcement made by Manafort's spokesperson today, it looks like the speculation surrounding Trump's former campaign chairman won't be winding down anytime soon. According to the Associated Press, Manafort will now be registering with the Justice Department as a foreign agent. But what exactly is a foreign agent, and what will that designation mean for Manafort?

When a person registers as a foreign agent with the Justice Department, it means that they are lobbying for the interests of a foreign government in the United States. Thanks to the Foreign Agents Registration Act (FARA) of 1938, anyone working on behalf of another country in a "political or quasi-political capacity" — such as lobbying — needs to publicly disclose that information, along with details about any activities, receipts, and payments involved, according to the U.S. Department of Justice.

According to CNN, Manafort spokesperson Jason Maloni said Manafort has been discussing FARA registration with authorities for a while now. "Mr. Manafort received formal guidance recently from the authorities and he is taking appropriate steps in response to the guidance," Maloni said, according to CNN. "The work in question was widely known, concluded before Mr. Manafort began working with the Trump campaign and was not conducted on behalf of the Russian government."

According to The Hill, two lobbying firms connected to Manafort — Podesta Group and Mercury — are retroactively registering with the Justice Department as foreign agents as well. From 2012 until 2014, both firms represented a Ukrainian non-profit that aimed to improve ties between the United States and Ukraine. The non-profit, European Centre for a Modern Ukraine, reportedly had ties to former Ukrainian President Viktor Yanukovych's pro-Russian Party of Regions.

The Federal Bureau of Investigation is still investigating any ties between the Trump campaign and the Russian government, according to Vox. Manafort has denied any allegations that he worked with Russian officials. "I did not work for the Russian government," he told CNN in a statement last month. "Once again, smear and innuendo are being used to paint a false picture. I look forward to meeting with those conducting serious investigations of these issues to discuss the actual facts."

Manafort may have resigned from the Trump campaign last August, but it looks like that connection has continued to follow him and his work. Until the FBI finishes its investigation, however, exactly what Manafort's work as a foreign agent meant in relation to his campaign position will remain unclear.