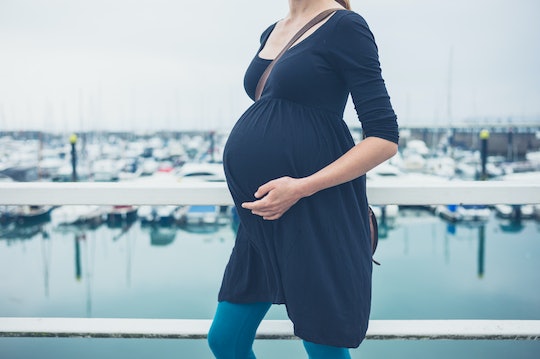 No, A Geriatric Pregnancy Doesn't Mean You're Old

Pregnancies come in all shapes and sizes — literally and figuratively — and for each unique pregnancy, there's a term to categorize and describe it. If you're in the over-35-and-pregnant club, you're used to a term that can seem slightly confusing at first: geriatric. The word usually conjures up images of nursing homes, not heathy, child-bearing women. So what is a geriatric pregnancy and why is this semi-offensive term used to describe women who are very pre-nursing home?

According to Webster's Dictionary, geriatric means "of or relating to elderly people, especially with regard to their health care." The word combined with pregnancy seems odd at best and impossible at worst. Why would pregnancy be lumped in with elderly care?

Believe it or not, when OB's use the term, it applies to a bit of a younger crowd. In fact, according to Healthline, when a woman who is over 35 conceives a baby, she's said to have a geriatric pregnancy.

The term originated years ago, when women had babies much younger than today. Self noted that when the threshold for "advanced maternal age" was set at 35 (around 20 to 30 years ago,) it was because 35 was the average age that the risk of having a baby with down syndrome or miscarrying increased. But according to Baby Center, those stats might not be fully accurate anymore. Since women have been waiting longer than ever to get pregnant, 35 is actually a pretty common (and healthy) age to do so.

These days, however, the risk is significantly lower. According to the National Down Syndrome Society, the odds of a women who is older than 35 giving birth to a baby with down syndrome is one in 350. Similarly, the risk of miscarriage has decreased as well, so the statistics that determined "advanced maternal age" aren't necessarily valid anymore.

That said, there is still a bit of an increased risk of having a baby with a chromosomal abnormality if you're in the over 35 club, but according to Baby Center, if you're generally healthy, your chances of having a healthy pregnancy are good.

All in all, having a geriatric pregnancy isn't automatically a cause for alarm. Your doctor will likely suggest you run tests to check for signs of abnormality in your baby, but as long as you're healthy and following your doctor's recommendations, you'll have a healthy, happy, non-elderly pregnancy.