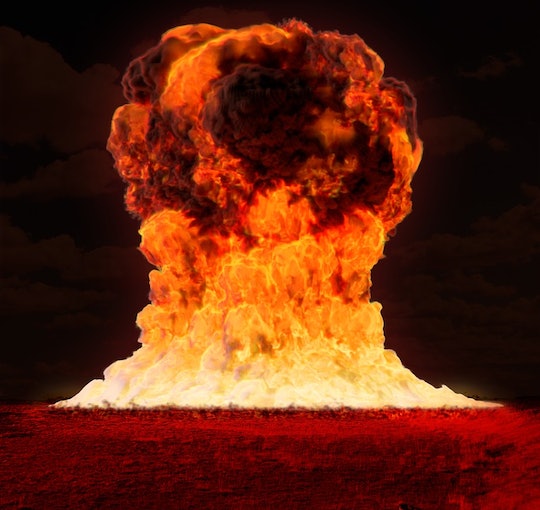 North Korea has reportedly been testing some pretty heavy-duty nuclear weapons lately. After officials declared the weapons "missile-ready," you may be wondering what exactly a hydrogen bomb is and just how powerful it is. Your concerns are warranted, because these nuclear fusion-fueled devices are nothing to scoff at and here's why.

First things first: There are a few key differences between atomic bombs and hydrogen bombs, one of which is strength. Atomic bombs gain their energy from the process of nuclear fission, which is when atoms split apart from one another, as Al Jazeera reported. It was this type of bomb that was used by the United States in World War II to attack Hiroshima and Nagasaki. According to USA TODAY, these weapons packed a punch of explosive power equivalent to roughly 15 and 20 kilotons (1,000 metric tons) of TNT each.

Hydrogen bombs, on the other hand, are extremely powerful weapons that utilize nuclear fusion — or the joining together of two atoms — to create an even greater explosion. Nuclear fusion is a two step process that is also known as a "thermonuclear reaction," and it is the same process that powers the sun, as CNN reported.

According to CNN, the United States tested a hydrogen bomb in November of 1952 that is believed to have released the equivalent energy of 10,000 kilotons (or 10 megatons) of TNT. That's nearly seven times more powerful than the weapon used in Hiroshima.

As the BBC reported, North Korea's state-controlled media said that officials performed a successful test of a hydrogen bomb that could be designed for intercontinental ballistic missiles that could reach as far as the United States. The New York Times reported that tremors from the impact of the underground test could be felt as far away as China. Officials were originally skeptical of the claim's validity, but analysis of the blast has since proven it to be as expected from a hydrogen bomb.

This marks the sixth test of North Korean nuclear technology and a significant advancement in the country's nuclear development, according to The Washington Post. Last January, the North Korean media reportedly announced its first test of a hydrogen bomb prompting international criticism — especially from the United States.

President Donald Trump quickly responded to the recent test, calling it “very hostile and dangerous to the United States,” according to The Guardian. While Trump's statements thus far have been harsh, yet eerily vague, no announcements have been made stating if and how the U.S. government plans to respond to the threat.

Still, the combination of the hydrogen bomb and intercontinental missiles have many concerned that North Korea is planning an attack. Some believe this testing was a direct response to Trump's promise to bring "fire and fury" to North Korea if the government did not stop making threats to the United States.

Regardless of the reasoning and purpose behind the tests, that much power in the hands of one of the nation's enemies is indeed alarming. And only time will tell how officials here in the United States and its allies across the globe will respond to these threats.