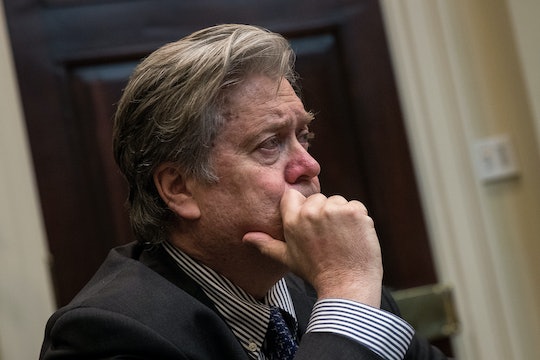 Why The "Leninist" Mindset Is Terrifying

President Donald Trump isn't the only mastermind behind his new policies as he continues to sign a flurry of executive orders. Trump has the help of his many controversial Cabinet appointments, most notably Chief Strategist Steve Bannon, whose alleged political ideologies are quite shocking for someone with such an influential position relative to the leader of the free world. In 2013, for instance, Bannon reportedly described himself as a “Leninist.” But, what exactly is a Leninist and why are their ideologies and political beliefs so out of touch with an American democracy?

Well, "Leninism" is a loaded term and its ideology — inspired by the ideas and political work of Russian communist revolutionary Vladimir Lenin — essentially is a means to achieve socialism, or a command economy. But what does it mean to be a "Leninist" in 2017? It’s hard to explain in a simple sentence and is widely open to interpretation, but it pretty much boils down to an anti-establishment mindset. And the way Bannon — the former head of Breitbart News, the far-right conservative site that Mother Jones regarded as a “haven for white nationalists” — allegedly interpreted this concept was to “bring everything crashing down, and destroy all of today’s establishment,” according to an article by the Daily Beast's Ronald Radosh, from August 2013.

“I’m a Leninist,” Trump’s chief political strategist reportedly told Radosh at a book party held in Bannon’s Capitol Hill townhouse on Nov. 12, 2013. “Lenin wanted to destroy the state, and that’s my goal, too. I want to bring everything crashing down, and destroy all of today’s establishment.” Radosh wrote that Bannon would allegedly do this by “employing Lenin’s strategy for Tea Party populist goals.” (Romper reached out to the White House for comment on those claims and is awaiting a response.)

This alleged conversation implies that Bannon is more intrigued by Leninist political tactics rather than the former Russian communist leader’s end goal, which doesn't make it any less concerning because “much of Lenin’s political style and strategy can be adapted to present conditions,” according to The Guardian:

He depended on constant conflict and drama. He deliberately used shock tactics. He was nearly always domineering, abusive and combative, and often downright vicious. He battered opponents into submission with the deliberate use of violent language, not because he was personally vicious – he wasn’t – but as a technique “calculated to evoke hatred, aversion, contempt … not to convince, not to correct the mistakes of the opponent but to destroy him, to wipe him and his organisation off the face of the earth”.

As The Guardian explained, “Two days after Lenin seized power in Russia almost exactly a century ago, he began an assault on the press.” Sound familiar? That's because the Trump administration's sour relationship with press began even before the president was sworn into office.

“The media should be embarrassed and humiliated and keep its mouth shut and just listen,” Bannon said in an interview with The New York Times just days after Trump’s inauguration. “I want you to quote this. The media here is the opposition party. They do not understand this country.”

Bannon is one of Trump’s most trusted and influential advisers and these tactics do not align with the Constitution or a free press. Rather these moves from Lenin's era would strive to see a government that oppresses its people and the truth. Bannon might want the Trump presidency to be a revolutionary moment, but this mindset and implementation of a political ideology is dangerous for an American democracy.