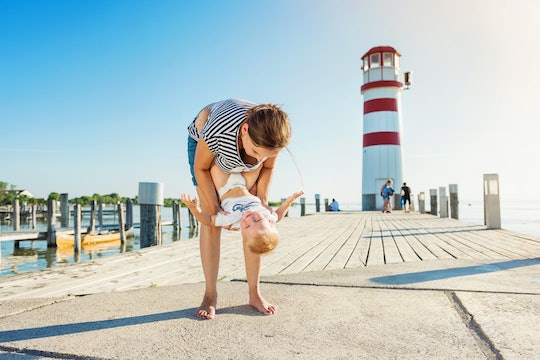 Everything You Need To Know About Being A Lighthouse Mom

The push and pull of parenting can feel like a tug of war on your heart. Too much interference feels like you're not providing the tools your child needs, too little feels like you're making them too self-reliant. The balance, according to parenting books, is being a lighthouse mom. But what is a lighthouse mom, and how do you know if you are one?

A few years ago, Doctor Kenneth Ginsburg wrote a book titled Raising Kids to Thrive: Balancing Love With Expectations and Protection With Trust. In it, he coined the term "lighthouse parents" for parents who are a strong place in the storm for their children, a light that guides them, and the person who calls them home. It seems really hokey on the surface, but stay with me. He also discussed the ways parents can set guidelines for their children while giving them enough freedom to fully realize who they'll become.

Being a lighthouse parent is all about setting boundaries and allowing children to work within those boundaries to not only provide them with a firm moral foundation, but also with the comforting reassurance that boundaries provide. It's not about dictating everything they do, or making those boundaries so tight that the children can't breathe, but instead, setting the rules and expectations and stepping back to allow your kids to understand that you're there to guide them when they need it, and that they can steer themselves.

What is a lighthouse mom, specifically? I think it's individual. Ginsburg wrote about how important is is to give your children freedom while standing as sentinel in their lives for both guidance and stability. It might not mean that you're letting them hang out at the park until after 9 p.m., but it might, and these decisions can vary from person to person. For one, I think where you live and the expectations of safety must be considered. While it was perfectly reasonable for me to run around my neighborhood alone when I was 9 years old, it's not reasonable for my 9-year-old to do so, but I don't hover over him when we're at the park either.

I've taught my children how to be aware and safe as much as I can, and I know that when the time comes in a few years, they'll be prepared to venture out on their own. They know that they can come to me if they have problems, but they'll also know that they can solve many of their problems themselves. It's about un-extreme parenting. It's not free-range parents who allow their 8-year-old to ride the train to and from school alone, or a tiger mom who tries to mold their child's existence. It's the mom who says things like "Sure, you can go to park, but remember not to touch the undersides of the benches, and don't forget sunscreen."

A lighthouse mom is more than just a beacon of certainty — she's also the one providing the toolbox needed for her children to fix their own boats, and is living in a way that shows her children that she, too, can fix what needs fixing. It's a mom who thinks of building resilience in children and fostering their independence while also growing stronger as a family. I, for one, am here for it.