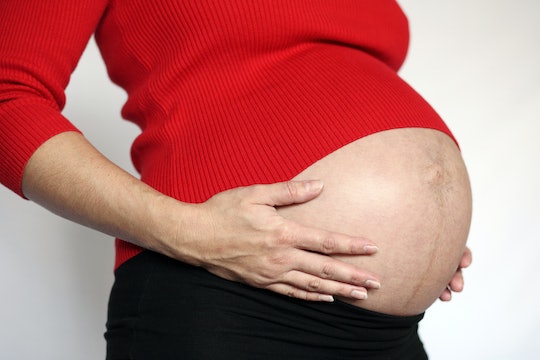 WTF Is That Black Line On My Belly Bump?!

Pregnancy brings about all sorts of bodily changes, some of them more expected than others. For instance, you probably anticipated the need for looser pants, but the sudden appearance of a vertical stripe on your belly might take you by surprise. So what is a linea nigra and why does it often appear in pregnancy? The pregnancy line is a common occurrence.

According to What To Expect, linea nigra is a Latin term meaning "black line," and it's a pretty spot-on description of this phenomenon. As further explained by What To Expect, it's a dark vertical line under your belly button that may show up around the 23rd week of your pregnancy. (Because you don't have enough bodily weirdnesses going on already.)

Even if the black line is news to you, it's pretty common. As noted in Fit Pregnancy, up to 75 percent of pregnant persons may experience this linea nigra. Oh, and it may not actually appear as Sharpie-marker black. In fact, the pregnancy line is often a dark brown in color, as noted by the American Pregnancy Association (AMA). Its exact cause is unknown, although it may be created by placental hormones that could stimulate the production of melanocytes, or skin cells responsible for pigmentation, as further explained by the AMA.

As far as most experts are concerned, the linea nigra is just a cosmetic byproduct of pregnancy, and in no way a cause for concern. As noted in Baby Center, the pigmentation of the pregnancy line will fade in about a year, although it may not completely go away. Everything from your skin tone to your personal pregnancy hormones may affect the duration of your linea nigra's appearance, and there's really nothing you can do to prevent or erase the line. That said, sun exposure may cause the line to darken again, so it's a good idea to keep your belly covered or use sunscreen on that area if you're outdoors, as noted by Pregnancy Corner. In general, the linea nigra is another harmless quirk of pregnancy, just way your body reacts to the act of making a baby.

More Like This
You'll Feel Like A Princess In These Gorgeous New Year's Eve Maternity Dresses
7 Things Pregnancy Dreams Can Mean If You're Not Pregnant
Yes, It’s Possible To Get Pregnant If You Have An IUD
Pinterest Predicts Their Top 2023 Trends In Parenting, Beauty, Fashion, Home, & More