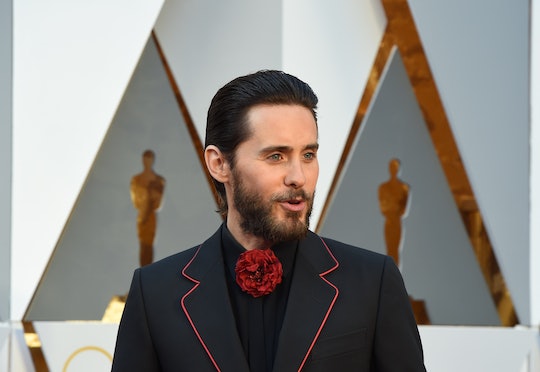 What Is A Merkin? Jared Leto Told Oscars Viewers To Google It, And No One Is Okay

It seems like the 2016 Academy Awards are not only entertaining, but educational as well. First Chris Rock schooled the world on diversity and racism in his opening monologue, and then Jared Leto tried to teach the world a little something about merkins. While presenting the award for Best Hair and Make-Up, Leto credited hair and makeup stylist for putting up with actors as well as, "the prosthetics, the wigs, the occasional merkin." This, of course, led many people at home to Google "what is a merkin?"

Now, before you look it up yourself, do yourself a favor and stay clear of Google Images. According to Webster's Dictionary, a merkin is false hair for the female genitalia — a wig for your vagina, guys. The merkin dates back to 1450 when it was used to cover up the pubic area when it was free form hair. In more recent years, however, the vag wig has become an accessory of sorts for female actors (and even a few male ones) who have to film full-frontal nude scenes. According to the Daily Beast, stars like Jake Gyllenhaal and Kate Winslet have worn merkins during their career.

Needless to say, many people were shocked AF to see their Google search results:

And some people were already on Leto's level:

In fact, some went as far as to say merkins were the night's biggest winner:

Thank you Jared Leto for bringing merkins back into the spotlight...and maybe in style?