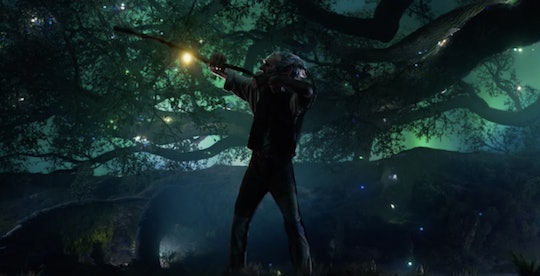 What Is A Phizzwizard Dream? 'The BFG' Is Full Of Wacky Words

One of the most delightful things about Roald Dahl? That man just got wordplay, in a creative, quirky way that enthralled kids, adults, and candy manufacturers alike. So when he set about to name different kinds of dreams in The BFG, he made them rich and resonant, making them a delight to hear during 2016's film version of the original book. But it's easy to get caught up in the fun-sounding words and forget the meaning behind them, so you might be wondering what a phizzwizard dream is when your kid requests one after watching The BFG.

According to Dahl, a phizzwizard dream is the cream of the crop — it's the best kind of dream a person can have. The BFG (ahem, that's the Big Friendly Giant for those who aren't familiar with him) catches dreams to shoot into kids' rooms at night, so he's always on the lookout for phizzwards. The BFG also keeps his eye out for "trogglehumpers" — which is what he calls the worst kind of nightmares.

Instead of delivering trogglehumpers to children, however, the BFG locks them up in jars so that they can't harm anyone. (Next time your children are scared of having a nightmare, you can tell them not to worry — the BFG's got their back.)

Phizzwizards and trogglehumpers are far from the only odd words in the movie — someone even made a glossary of all of the wacky words in The BFG — which makes it a fun movie to watch and might encourage some wordplay games with your kids. There's a reason children love Roald Dahl, and a lot of it has to do with words like "twitch-tickling" and "squiff-squiddled." Dahl also spoke to children in a way that wasn't condescending or patronizing — it was just fun.

After your children watch The BFG, you might even want to take a page out of Dahl's book: When he first wrote the story and read it aloud to his family, he would climb up on a ladder outside his daughters' window and pretend to blow good dreams in to them before they fell asleep.

If anyone in your family loved The BFG, there's a couple of other great Dahl books to read aloud. Fantastic Mr. Fox was actually a Dahl book before it became a Wes Anderson movie (which is also great); Charlie and the Chocolate Factory is a clear classic; and The Witches is another great read. With any luck, a little more Dahl in your lives might give you and your kids some phizzwizard dreams.