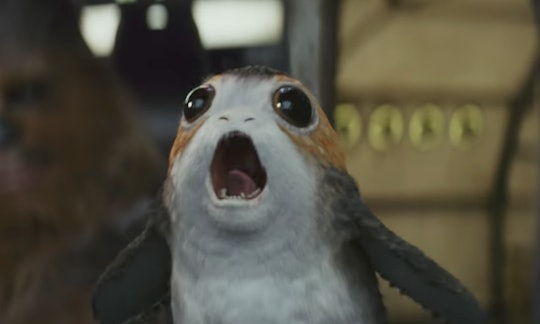 So far every film in the new Star Wars trilogy has managed to introduce a brand new creature that's cute enough to have fans scrambling for merchandise that brings the little bugger right into their home. The Force Awakens awoke the cult of BB-8, the rolling robot that had a surprising amount of personality for something that only spoke in beeps. Now The Last Jedi has introduced the porg. But what is this creature, exactly?

That was the question on everyone's mind when the trailer for The Last Jedi revealed the tiny chirping animal that had been made to resemble something sort of like a baby seal crossed with a penguin. StarWars.com spoke to Lucasfilm Story Group’s Pablo Hidalgo for a little clarity on the matter. Hidalgo explained that porgs were the brainchild of director Rian Johnson, and the inspiration for them came from puffins. After seeing such a proliferation of puffins on the Irish island of Skellig Michael during the filming of The Force Awakens, Johnson decided to work them into the Star Wars universe.

Porgs are, essentially, birds: they build nests and fly, and they definitely bear a passing visual similarity to their avian cousins. But they are an entirely made up creature, so the comparison isn't exact. Porgs live in the cliffs of Ahch-To, the planet where Rey and Luke are. And just in case they weren't cute enough, their babies are apparently called "porglets."

Hidalgo was more than aware of the immediate affection audiences had for the porgs and understood that there was a simple reasons for that. "Porgs are cute," he said. "You fall into those deep, soulful eyes. I think a lot of people are going to want a porg as a pet." Sadly, devotees of the porg are going to have to settle for a toy equivalent, because the real world has yet to produce anything quite this adorable. When you see a porg onscreen, you might be seeing a puppet or an entirely computer generated image.

In a conversation with People, creature supervisor Neal Scanlan elaborated on the porg's backstory a little bit more: in addition to puffins, Johnson also wanted the porg to share qualities with seals and pugs. However, it took a lot of work before the final (surprisingly simple) design was decided upon. "We did many, many drawings and eventually one of our concept designers literally drew a sort of little potato with a pair of legs and some big eyes on it — very little detail other than that, just a little tail at the back," Scanlan said. "We all felt, 'wow, that's gorgeous.' When Rian saw it, he said, 'That's it. That's what was in my mind.'"

Not every new creature dropped into the world of Star Wars has been so warmly received (few were so annoying as Jar Jar Binks, for example) but the porgs won over audiences despite the fact that they were intended to be a little bothersome — though they also provide some thankful levity. "The porgs were designed to be almost slightly irritating in the sense that they are numerous and they tend to be overly inquisitive, they're mischievous," Scanlan told People.

He went on to add, "This film is I'm sure going to be quite an emotional and visual rollercoaster an the porgs can provide a moment of respite, a little moment where you can reset yourself, ready for what is about to come and enjoy them on that pure level."

No matter how many high-stress, heartbreaking turns The Last Jedi takes, fans will certainly be able to find some comfort in those big, soulful porg eyes.