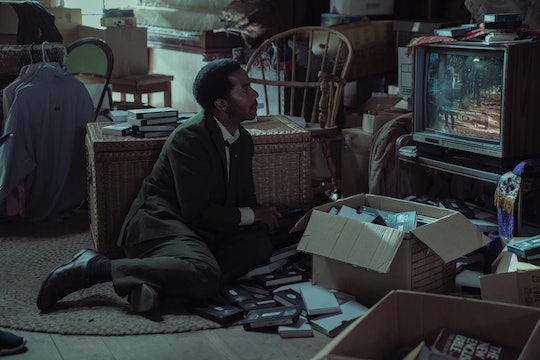 The Schisma On 'Castle Rock' Is Biblical and Scientific — But Is It Real?

Hulu’s new series, Castle Rock, is building up the suspense, and in the sixth episode of the season, it’s ramping up the scientific jargon as well. In “Filter” you see Henry Deaver trying to piece together his past after watching a video of his father taking him into the woods. When retracing his steps, he comes across a mysterious duo who tell him about a "schisma." But what is a schisma, and is it really what’s described in Castle Rock?

Warning: Spoilers for Episode 6 of Castle Rock ahead.

It turns out that a schisma plays a big part in musical theory. According to Tonalsoft, a schisma (originally spelled skhisma) is the halfway point between a musical comma — also referred to as the Pythagorean comma — which “designates an extremely small interval, just barely discernible to human pitch-detection.” The word “schisma” comes from the Greek word schism, which is defined as a “division” or “separation” by Merriam-Webster, and was often used in describing a group or individuals split from within the Church or a religious institution.

The Castle Rock explanation of a schisma has a lot to do with hearing and acoustics, but the writers have used their creative license to it a supernatural backstory. In episode six, Henry finds The Kid in his barn, donning his father clothes and watching an old video from Henry’s childhood. In the video, Henry is walking through the forest while his father is telling him to listen carefully for some kind of sound. Henry takes the video camera into the woods, and replays the tape, carefully following the same path he took with his father when he was a child.

By nightfall, Henry comes upon Odin, a deaf man, and Willie — who had also appeared earlier at Rev. Deaver’s funeral and at the ceremony honoring Alan Pangborn. Odin, who speaks in sign language translated by Willie, reveals that he knew Henry’s father and that together they would try to listen to the schisma, which Rev. Deaver believed to be the voice of God. Odin, being a scientist, described the schisma in his own scientific terms:

The ancients called it the music of the spheres. Of course, I have a more scientific view of the nature of the schisma — its the preferred nomenclature now. Best I can tell, schisma is actually nanoscale turbulences caused by cochlear quantum totalities abrading in parallel. Other ears, other nows. All possible pasts, all possible presents. Schisma is the sound of the universe trying to reconcile them. To some listeners the schisma sounds like a ringing in the ears. The sound may come and go, but the schisma is eternal and everywhere, underlying all space time.

He tells Henry that most people can’t hear the schisma, but a “lucky few” can hear it constantly like a ringing in the ears (which Henry has been dealing with since childhood). Odin then reveals that Rev. Deaver conceived a device to hear the schisma called the “filter” which was designed with reference to the “schematics Noah was dictated by God.” In his trailer, Odin shows Henry a spiky, foam-insulated sound chamber that houses total silence, so only the schisma can be heard.

As soon as Henry climbs inside the chamber, Odin shuts the door, and Henry’s ear ringing turns into a painful and chaotic spiral of sounds, flashes, and memories, but it is unclear exactly what the schisma is doing to him. Hopefully, as the season unfolds, fans will get to learn more about this mysterious "voice of God" and how it relates to Henry’s past, his father’s death, and what it means for the town of Castle Rock.