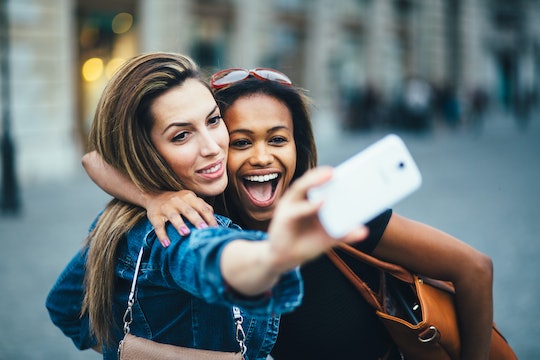 You may have thought that selfies were totally fun and sufficient as is, but Apple has just unveiled a revamped rendition of the social media staple. In a matter of time, your Instagram and Facebook feeds are going to be filled with something called "slofies," Apple's reinvention of the selfie we all know and love.

Apple revealed this week that it's coming out with two new iPhone models — the iPhone 11 Pro and the iPhone 11 Pro Max. The phones boast a better camera, longer battery life, and faster processor, and are meant to be an upgrade to whatever phone you're carrying around in your pocket at the moment, according to The Verge. But the iPhone 11 isn't only about the technological upgrades — it also has some new, fun features that are sure to be game changers. And one of those features is, you guessed it, the "slofie."

When iPhone 11 users go into the camera mode, they'll be able to take a selfie in slofie mode, according to Mashable. This new feature will allow users to take a short video of themselves in slow motion. It's really that simple. But the previews of the slofies from an Apple Event make it seem like these videos are going to take over the world — or your Instagram feed.

Think about it. A slofie seems like the perfect way to show off a brand new haircut, your kid unwrapping a present, blowing bubbles... the list goes on. While some people are exciting about the new version of selfies, some Twitter users weren't sure why this invention the slow motion selfie was necessary. But, hey, who ever said we needed the OG selfie or boomerangs, right?

"Please. Un-invent this," one person tweeted.

If you're not sure how you feel about slofies, you can see for yourself when the new iPhone 11 models are released on Friday, Sept. 20, according to TechRadar. It's possible that people won't care about them once they get their new phones. Or it's very possible that they'll be everywhere come Sept. 21. That's just something that people will just have to wait and find out about.

Slofies aren't the only exciting thing about the iPhone 11's new camera. The phone boasts a new dual camera system that will take ultra wide photos, allowing users to capture everything they want (and allow to include all of their family members in that group photo). The phone will also allow users to shoot and edit super high quality video, take photos in low lighting, and take instant videos, according to Apple. As if this wasn't a good enough reason to love the phone, the photos are brighter, sharper, and clearer than ever before. Talk about transforming your Instagram feed.

Needless to say, slofie is a word that people will be hearing a lot of this upcoming year, whether they love it or hate it.