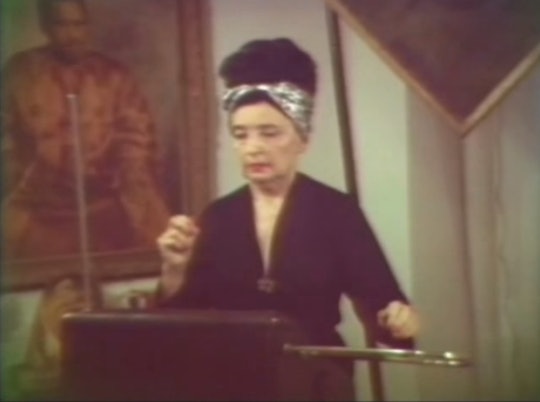 What Is A Theremin? The Latest Google Doodle Lets You Play This Weird Musical Instrument

Google users are in for a treat. In honor of theremin virtuoso Clara Rockmore's birthday, Wednesday's Google Doodle gives an interactive lesson on the spooky-sounding electronic instrument, after which users can "play" the theremin themselves. The instrument was invented by Lev Sergeyevich Termen (his named was later Westernized to Léon Theremin) in 1920, and patented in the U.S. in 1928. But it was Rockmore who revolutionized the instrument, and Google is now paying its respect to her on the 105th anniversary of her birth.

Those unfamiliar with the theremin might recognize its distinct sound from the Star Trek theme, or perhaps the Beach Boys' "Good Vibrations," but the original application for the instrument wasn't for sci-fi theme songs or pop music; Rockmore (as well as the inventor) utilized the world's first electronic musical instrument to play classical music, often accompanied by the piano.

Rockmore was born into a musically inclined family in Russia in 1911, displaying perfect pitch from the time she was a toddler, and eventually becoming the youngest ever violin student accepted into the St. Petersburg Imperial Conservatory, when she was just 4 years old. Forced to flee Russia, her family arrived in the U.S. in 1921, but, tragically, just before she was set to make her American concert debut, she developed arthritis in her bow arm and was forced to quit playing the violin.

Luckily, Rockmore soon met Termen, who introduced the girl to his invention. "I was fascinated by the aesthetic part of it, the visual beauty, the idea of playing in the air," she said, according to The Nadia Reisenberg & Clara Rockmore Foundation, "and I loved the sound. I tried it, and apparently showed some kind of immediate ability to manipulate it. Soon Lev Sergeyevich gave me, for a present, the RCA model theremin." Rockmore developed her own techinique, and eventually went on to play with the Philadelphia Orchestra. Rockmore also convinced Termen to redesign the theremin, making it more precise, and expanding the range from three octaves to five.

TIME reported in a 1928 article that the theremin is much like a radio, with electric currents alternating so rapidly that they can't be picked up by the human ear. "[J]ust as a radio amateur can make a cheap receiving set squeal by moving his hand about the unprotected parts and thus altering the electrical tension of the whole set, just so Professor Theremin altered the electro tension of the electro-magnet fields within his box. The precision with which he built his contrivance permitted him to extract, not amateur squeals, but harmonious musical sounds." The instrument is played by moving the right hand closer towards the vertical road for a higher tone, and farther away for a lower tone. The volume is controlled by the left hand, and by subtly twitching the right hand, musicians can create a vibratto effect for a richer sound.

Theremins are really cool, but unfortunately, they cost anywhere from $300-500 (and no, I didn't need to look that up; I already knew from personal research). But thanks to Google, we can all play one for free, if only for a day. And let's not forget to thank Clara Rockmore, without whom this wouldn't have been possible.