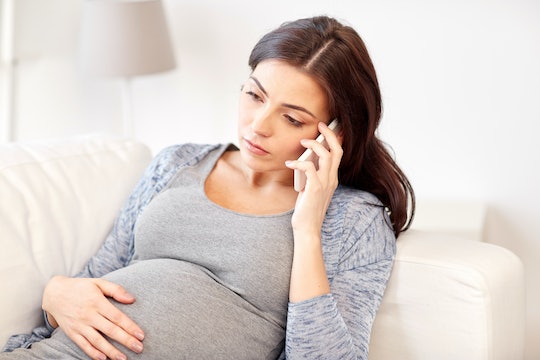 What Is A Threatened Abortion?

Pregnancy can be one of the happiest, most fulfilling experiences in a woman's life, but all it takes is a split second for the happiness to turn to terror with any threat to your pregnancy or baby. Hearing the words "miscarriage" or "threatened abortion" can be terrifying. You've probably heard of a miscarriage and know what it is, but what is a threatened abortion? There is a big difference.

According to Mount Sinai Health Systems, a threatened abortion, which is also called a threatened miscarriage, is a naturally occurring situation and is diagnosed when there is vaginal bleeding during the first 20 weeks of pregnancy, indicating a miscarriage is possible.

Vaginal bleeding in those first 20 weeks without any other problems, like cramping or passing tissue, is categorized as a threatened abortion, explained Baby Med. The difference between a miscarriage and a threatened abortion? The signs of a miscarriage include heavy, bright red bleeding, cramping, and passage of clot-like tissue. Their website suggested that the first thing that should be done when a pregnant woman experiences bleeding is to make sure the baby's heartbeat is present, which means the pregnancy is viable. Baby Med also noted that many women who have bleeding and a threatened abortion can go on to have healthy babies, and have a normal pregnancy.

According to a study about the management of threatened abortions, published by the Department of Obstetrics and Gynecology at the University Medical School of Pécs in Hungary, threatened abortion can be caused by chromosomal abnormalities, physical abnormalities, infections, or other various underlying health issues in the mother and father. Their study suggested that depending on the situation, threatened abortions can be managed in different ways, including corrective surgery, hormone and immunotherapy, steroids, and the modification of environmental and physical factors.

Miscarriages can happen at anytime during pregnancy, and are associated with heavy bleeding with tissue or clot-like tissue and cramping. Threatened abortions are vaginal bleeding, occurring only in the first five months of pregnancy, with a present fetal heartbeat, and no other symptoms. If you are pregnant, and experience any pain or cramping, call your doctor immediately. Just the thought of a pregnancy loss can be very hard, so reach out for as much support from your family and friends as you can.