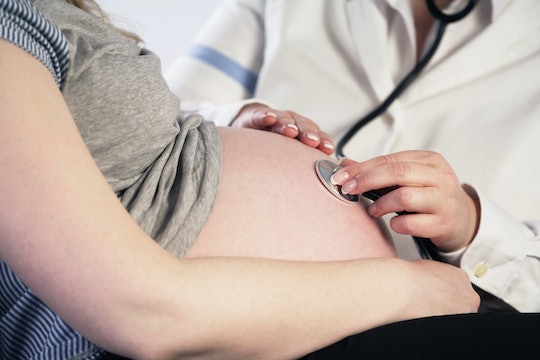 Everything You Need To Know About A Tipped Uterus

It's common knowledge that every woman's body is different. Each person experiences pregnancy differently, but for some women, the very nature of their uterus makes their pregnancy a bit different right off the bat. The majority of uteruses are pear shaped, facing straight up and down, but some women have a tipped uterus that looks a bit different than most. What is a tipped uterus and how does it affect a pregnancy? Luckily, it's not usually as big of a deal as it sounds.

According to the American Pregnancy Association (APA,) a tipped uterus is exactly what it sounds like. Instead of facing straight up and down, a tipped uterus will be tilted backwards, or sometimes even inverted. The condition goes by several different names (tipped, tilted, inverted, retroverted), but they're all indicative of a uterus that is facing in a slightly different direction than most.

Women's Health noted that the condition isn't that uncommon — about 30 percent of women have a tilted uterus, many of them without even knowing it. The most common symptom of a tipped uterus, the article stated, is painful intercourse, since different levels of penetration may irritate your uterus. Similarly, the APA stated that difficulty inserting a tampon, painful menstruation, or minor incontinence may all be signs your uterus is facing in a different direction than you may think.

Although many people assume that a tipped uterus will affect their chances of getting pregnant or cause a difficult pregnancy, that isn't necessarily true. What To Expect stated that a tipped uterus isn't technically a "medical condition" or complication — it's simply an anatomical variance, like hair color or eye color. It means that your baby will be slightly reclined in your uterus, and shouldn't have much of an impact at all on your fertility, or on your growing baby once you are pregnant.

Some women have tilted uteruses from the start, but Baby Center noted that others may be caused by childbirth, or underlying conditions like endometriosis or pelvic inflammatory disease (PID.) Whatever the case may be, you can rest easy knowing that the direction your uterus is facing won't impact your fertility or the health of your baby once you conceive.