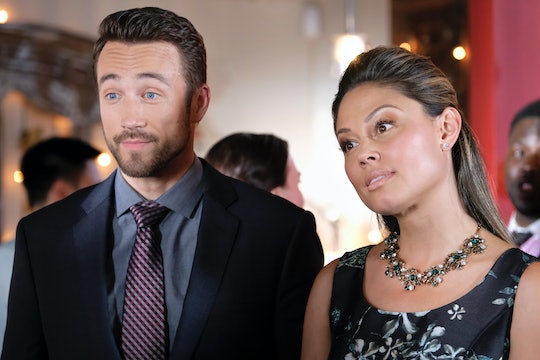 Of all the Christmas movies ever made, the best ones, in my opinion, are those that deal with a simple mixup. You know — a misunderstanding or small quandary that sends the protagonist(s) into a tail spin in order for growth to occur. You know, there has to be some kind of trigger to push the characters into their life's journey. A Twist of Christmas is one of those made-for-tv movies. with that said, what is A Twist of Christmas based on?

According to Lifetime, there's no obvious indicator if A Twist of Christmas is based on any one book or movie specifically. Although that doesn't mean it's not. And actually, there is a play called A Christmas Twist (not exactly the same, but close) with the description saying it's, "A very funny satire of Dickensian excesses about Christmas and poor people and the rich people who don't care about them. A Christmas Twist is bursting with humor that makes a mockery of Christmas sentimentality. Perfect theatre for the holiday season."

Compared to A Christmas Twist, it doesn't sound like that's the inspiration, but judge for yourself. In A Twist of Christmas, single, working mom Abby (Vanessa Lachey) with her son, and overwhelmed lawyer, Ryan (Brendon Zub), with his daughter, get their toys all mixed up at a busy department store. Sounds like a classic setup for folly and romance. With the confusion both Christmases may be ruined forever — but not really. The pair can't stand each other, which makes for great chemistry, but they learn to work together to save their plans, falling in love through the process. Typical.

Yeah, so I doubt the movie is based on the broadway play, but you never know where inspiration comes from. If you can't quite place where you might know Vanessa aside from A Twist of Christmas, you might have seen her as East Coast correspondent for Entertainment Tonight every now and then, or from her from movies like like Sebastian Says and First Wives Club and has had cameos and stints in tons of shows. And did I mention she's married to 98 Degrees singer, Nick Lachey? That information matters. They met on the set of MTV's TRL where Vanessa hosted, and aww.

The couple are said to be obsessed with the holiday season — hence the Christmas movie. She described her decorative taste to People as “kind of a modern cabin feel,” thanks to pops of buffalo plaid (her new obsession) and larger-than-life decorative items like Nutcrackers. “When it comes to holidays, especially Christmas, I’m all about pops of color, special items,” she said, adding later the most important part of the season is keeping the magic saying, "It’s a really great time to take a minute and take a beat and spend time with [her kids] and just watch their imaginations go wild.” Totally relatable, just as I'm sure her character is in A Twist of Christmas.

I wish I could tell you exactly what A Twist of Christmas is based on but it looks like the plot of dozens of books and movies. I don't mean that in a bad way. Actually, it's kind of great to know exactly what you're getting sometimes. And this one looks to be just that.